It's grim down south! 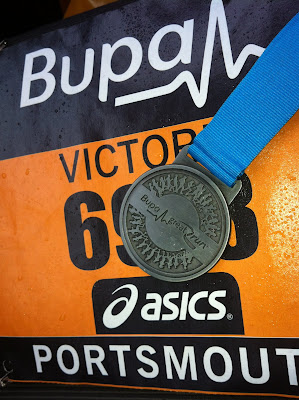 I ran this race last year and had been looking forward to running it again this year. Despite being a 45 minute drive away, and me not having a clue what Portsmouth has to offer apart from outlet shopping at Gunwharf Quays I still consider that this is a 'local' race. It is also the biggest 10mile road race in the world.
An early night last night, and an extra hour gained due to the clock going back should have meant that I woke up feeling bright and full of enthusiasm. I love races! And the morning of a race normally sees me buzzing about the house making a 101 last minute checks on my race day bag. But not today. Today I could barely drag myself out of bed. I moped around the kitchen, making porridge and eating painkillers - anything to try to stop the throbbing headache and general acheyness! I thought about pulling out, but I'd been looking forward to my last big race of the year for ages, and surely I'd feel better when I started, wouldn't I?
I left about half an hour earlier than last year, which meant that I got to Southsea Common about an hour earlier than I did last time! I sat in the car, reading my book, listening to the radio and generally trying to avoid the grey, miserable weather outside. About an hour before the race I met up with a fellow parkrunner at the start. Having a friendly face to talk to really did help, and the time passed fairly quickly. I'm glad we were in the first wave to start as it was jolly chilly standing around in shorts and a vest top!
The minute I crossed the start line I decided I was ravenously hungry! No idea why as I'd eaten a good breakfast, and a couple of bananas. Maybe it was my body thinking it was really 12 o'clock not 11 o'clock. As last year the race was crowded through out, but especially at the start. The road narrowed several times and I had to slow to almost walking pace a few times. I wasn't worried, I wasn't out to get a good time, for the first 8 miles I spent most of the time wondering when would be a good time to drop out, and after 8 miles I only carried on because it seemed silly to stop so close to the end.
My headache never let up, no amount of endorphins were going to shift that one (still got the headache now) and I can honestly say that this is the least enjoyable race I have run. I can't think of a single part that was fun! My throat ached, my neck was stiff and my legs were refusing to function properly and to make things even better it was drizzling! I lost it in a major way between mile 6 and 8. My speed dropped right down and I couldn't seem to find any motivation to pick it up. Coming round onto the seafront, and being hit by a blast of sea air seemed to bring me back to my senses. Either that or I realised that if I ran too slowly I'd spend far longer getting soaked and windswept!
At about 8.5 miles I spotted Richard at the Chineham Park Running Club supporters stand. Richard normally hurls 'friendly' abuse at parkrun on a Saturday, so the fact that he was saying encouraging things today convinced me that I must look at least as bad as I felt!
I crossed the line, eventually, in 1hr 27mins 37 seconds, which is over 2 minutes faster than last year, but I felt awful! I staggered back to my car, then realised I was going to have to eat something if I was going to drive home, so staggered back to find a hot dog seller! The drive home was slow due to all the road closures, but I did end up driving along one of the roads we'd run down - I have to say that I ran it faster than I was able to drive it!
Will I run this race again? Well, I have just entered for 2012, so I guess that's a yes, but I don't think I'll be running any race again when I feel 'flu-y!' I run because I enjoy it, and it is very hard to enjoy anything when feeling under the weather.
Posted by MrsBridgewater at 17:31