Biting off more than I can chew? 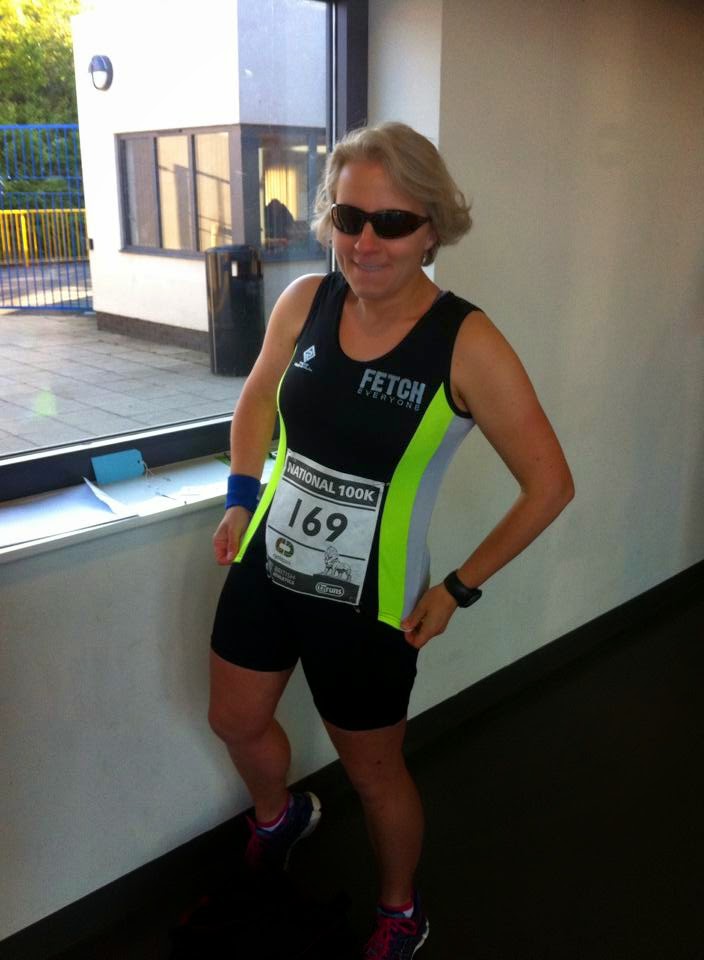 Apparently it is good to challenge oneself from time to time.  I am not a huge fan of pushing myself too hard, or doing things that I don't think I'll be very good at so I spend a lot of my life playing it safe.  Until yesterday I had never entered a race having no idea if I would be able to finish or not, and this should have been the same.  It should have come almost midway between two marathons and represented a challenge, but not a mountain that I wouldn't be able to climb.  So what was this race?  Well, there were several races happening at the same time, the National 50k and 100k and the 2014 Anglo-Celtic Plate competition all superbly organised by the wonderful team at tzruns.  I wanted to run the 50k, but being a total novice and having no idea how long this would take me I entered the 100k with the knowledge that I could drop down to 50k on the day.  This gave me a longer cut off time, and a much earlier start time.

My running this year has not been great.  I dropped out of the Brighton marathon as I was just too tired.  Not injured, not unwell, just well and truly worn out at the end of a long school term.  The thought of getting to Brighton was exhausting enough without having to run 26.2 miles once I got there.  I've struggled with anything approaching speed work, and my long slow runs have been shockingly slow and not actually that long.  The furthest run I'd done this year was a horrible run at Bramley and I was about to set out to run 31miles.  I felt entirely unprepared, unsure of what to expect, almost certain that I would make an utter fool of myself.

Husbando drove me to the Cyclopark in Gravesend early on Saturday morning.  I was somewhat intimidated when I saw the England, Wales and Scotland teams, resplendent in their national strips, getting ready for the race.  Who on Earth was I to think I could run with these athletes?   There were friendly faces to meet and greet, not least 'Team Brassington' and the amazing race organiser Ian Berry and the inspirational Sandra Bowers.  But, boy, was I nervous!  I set up my drinks and snacks in the designated area, used to loos, pinned on my race number, and made my way to the start.  I was starting with people who were planning to run 100k.  This made me feel even more of a fraud. 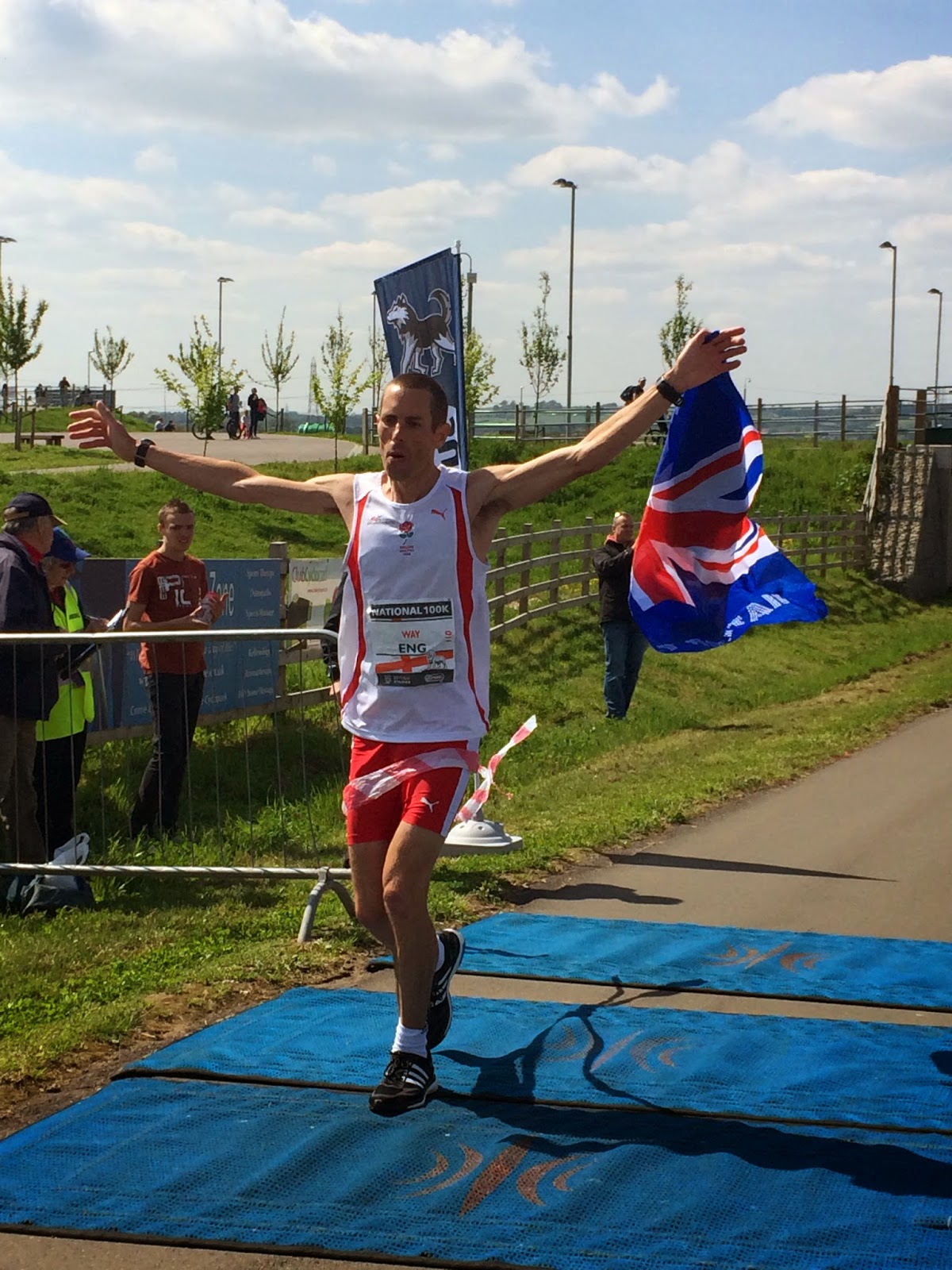 The atmosphere on the start line was very friendly, vaseline was passed around, people were chatting about other races etc. etc.  The horn went and we were off.  I repeated my 'start slow' mantra in my head, but pretty much ignored that!  I'd planned on starting out at 10min/mile pace, but fell into step with 2 blokes and we were running 9min/miles and just under, but it felt comfortable.  We were chatting away and enjoying the early morning (8am start) sunshine.  We were lapped at the end of our second lap by the amazing Steve Way and Pieter Vermeesch.  They looked as though they were out for a gentle jog - making it look so easy.  The second time Steve lapped me I said 'Two' under (I thought) my breath.  Steve laughed and I said I intended to keep count.  When I missed a number he commented and I admitted that I'd lost count, but that I was now more familiar with his backside than my own!  (And it was an amazing backside!)  He laughed and after that didn't fail to make a comment every time he lapped me on his way to breaking the British 100k road record.  What a lovely man.

The support was amazing.  Running laps means that you pass the finish area a lot - and the supporters really worked hard, handing out drinks, snacks and encouragement.   I can't believe how many people were cheering little old me on!  How did they all know my name? I'd love to be able to thank each and every one of them!  At one point a new face appeared in the crowd, cheering me on!  One of my online running buddies from Fetch Everyone had popped by to see how I was getting on.  That was an amazing boost.   I'd love to publicly thank every single marshall and supporter - you were amazing yesterday.

The running itself was going surprisingly well.  I felt no pressure to run in a certain time, I'd set myself an a, b and c target, but knew that I'd be happy to finish the 50k.  At 12 miles I was running past the feed stations and saw that the people who were running the 50k had started to arrive.  I was relieved to see the friend who a) bullied me into doing the race and b) was going to drive me home!  I stopped for a minute or two to grab something to eat and say hello.  My right hamstring felt a bit tight, but nothing that I couldn't cope with and I felt comfortable and happy.

I set off again making a concerted effort to run more slowly.  I'd run over 18 miles before the main 50k runners started.  It was somewhat disconcerting to be overtaken at such speed by those on fresh legs, but it meant that there were new people to chat with!  At 21 miles I started to get awful stomach cramps.  I grabbed some salty crisps to try to counter this, but at 25 miles the world fell out of my bottom (thank heavens for the loos on the course!) Still, I'd got this far and a little bit of runner's tummy was not going to stop me now.  I thought back to the last time I'd run at the Cyclopark - last year's Kent Roadrunner Marathon,  that had felt a lot harder.  I'd ended up walking up Tourettes Hill after about the 13 lap, and yesterday I ran up it every time.  I was also aware (not just because everyone kept telling me, but also because my face ached) that I was smiling a lot!  I couldn't believe that I was actually doing it! 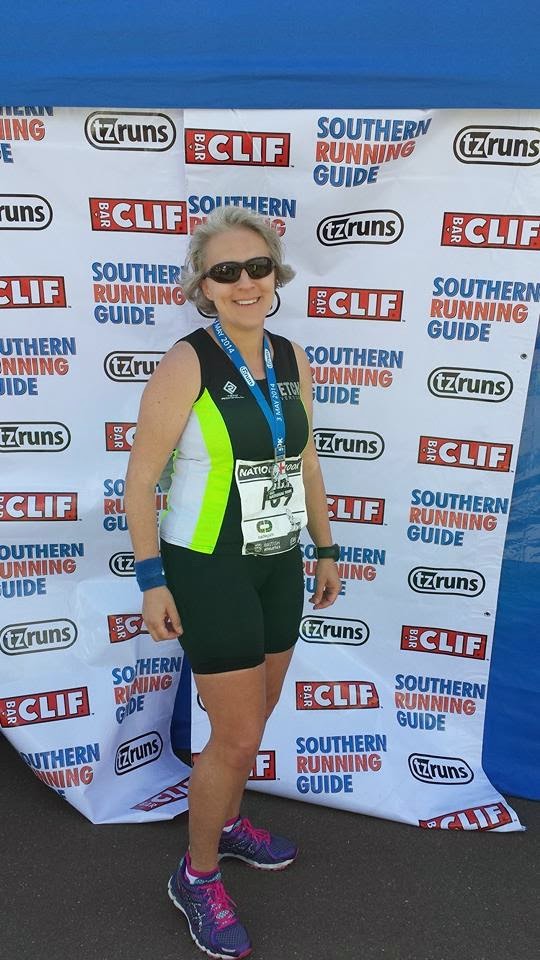 That said, there was an amazing sense of relief when I started my last lap (24 laps in total). I tried to put on a bit of a sprint finish, but I think I was just about out of energy by then - I did have a huge smile on my face though - as you can see from this short video clip, and the cheesy grin in this photo!  I finished in 5hrs 17mins and some seconds.  Ahead of my a) target of 5hrs 30.  My c) target was that I wanted to finish my 50k before Steve Way finished the 100k!

After a quick shower and inspection of the rather alarming tan lines I was back at the finish area to cheer on the rest of the runners.  Such amazing runs from so many people.  I also got to put names (and voices!) to faces that I only know via the internet, which was lovely.   I got to see one of the guys I had run with at the very start finish too.  He dropped back to 50k after having 'a bit of a shite run' (as he put it). 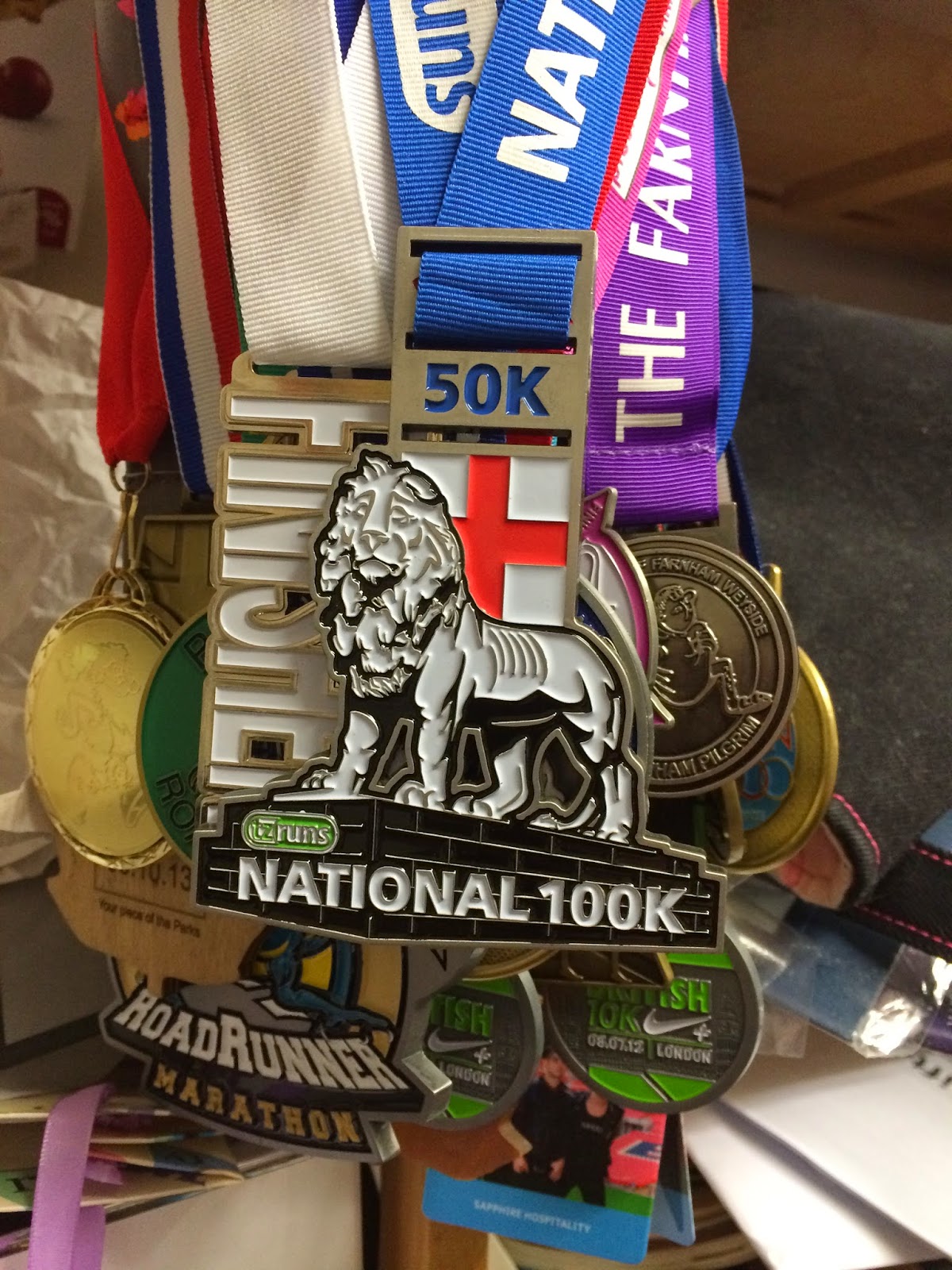 So, what a day!  Would I do it again?  I don't think so.  It was fun, but I am completely and utterly drained today.  I haven't even got the energy to feel hungry.  But then again, never say never!  My legs feel better today than I thought they would - I'm about to test them by assembling the new lawn mower and having a go at taming the savannah like grass in the front garden... if you don't hear from me for a while please do send a search party.

Thanks to everyone at tzruns who made it happen, to every single supporter and marshall and to all the other runners who made this such a special day.