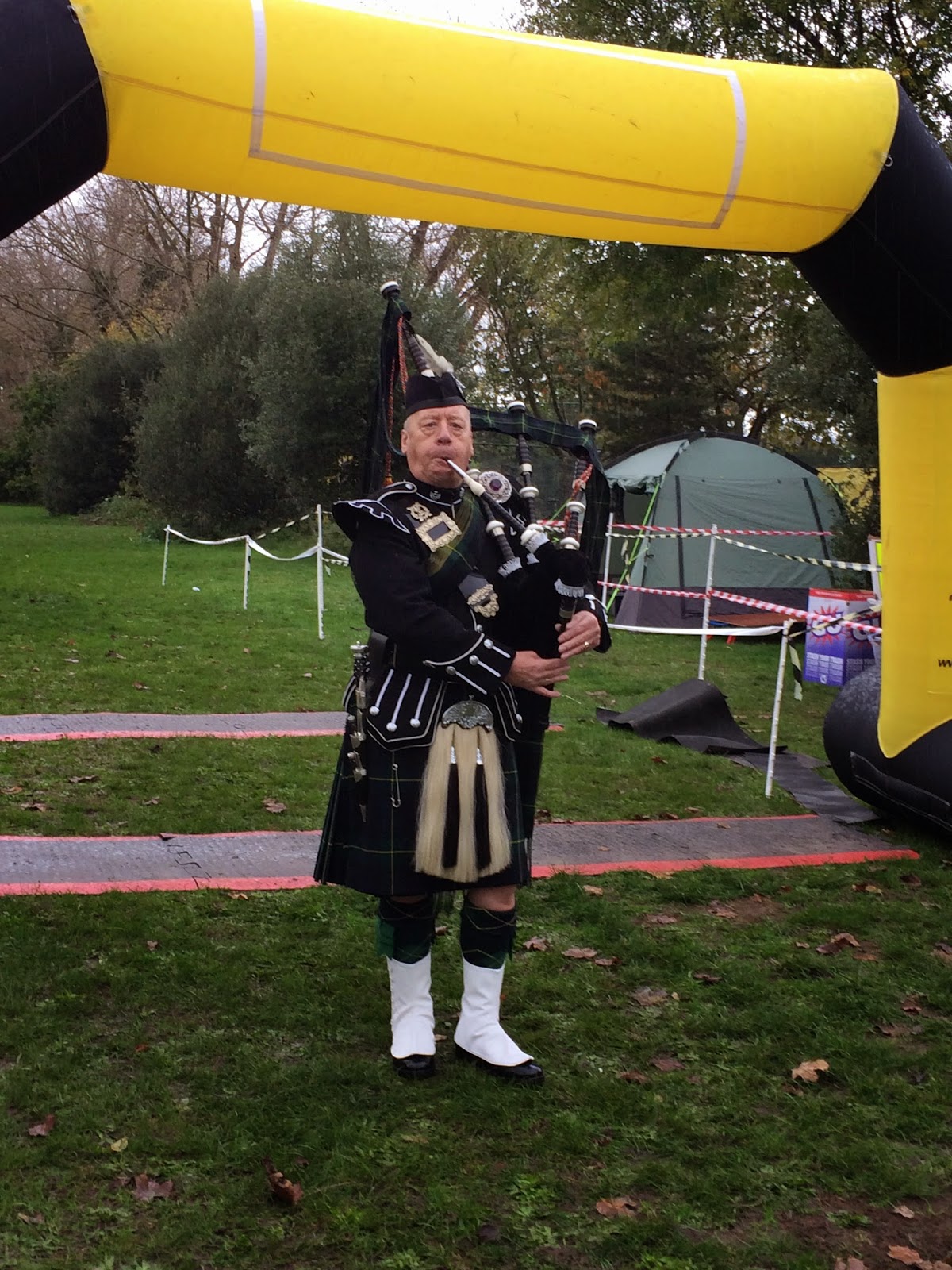 This time last week I had no races planned until February.  That suited me just fine.  I'd run a good half marathon and was quite happy just to bimble through the rest of the year, having a nice slow start to my training for next year's marathons.  Then someone mentioned that they were running a half marathon in Kingston, and as I had nothing planned I thought I'd look into it.  I almost got no further than that.  The Fredster is due to run his 100th parkrun on 29th November - it has to happen then as a Facebook 'event' has been set up, and that means he couldn't miss a Saturday.  But, but, but… the race started at the same place as parkrun…. could we do this?  Yes we could!
So, having left it too late to enter online, I emailed the race organisers to check that there would be plenty of availability to enter on the day, persuaded my reluctant 15 year old to a) get up early on the last Saturday of half term and b) run with her 10 year old brother.  I thought it might be possible for me to run both parkrun and the race, but really didn't want to risk having to make a mad dash from the finish of one to the start of another.  We set off this morning with loads of time to spare.  I'd forgotten how hopelessly lost I'd got the last time I tried to get to the venue (Kingston parkrun back in March this year or maybe last year).  Sat nav is great, but not infallible.  I ended up doing a couple of loops of a Kingston before finding the right turning.  Getting lost is stressful.  Being late is stressful. I hate getting lost and I hate being late.  Trying to work out how to get where I need to be at the time I need to be there with two children in the car is very stressful.  Needless to say we got there in the end, and we weren't late but the car park was full, so we had to find somewhere to park on the street and then barrel along the towpath to the Hawker Centre where I registered for the race and bumped into lots of friends.

I saw the children off on their parkrun, then chatted with people while I waited for them to come back.  It started to rain.  It had been seasonably chilly since we'd woken up and now it was raining.  I patted myself on the back for remembering to bring my hat with me and was a little cross with myself for thinking I would be happy in a vest top and shorts!  While we waited of the parkrunners to return, the Thames Meander Marathon runners set off - to the accompaniment of bag pipes!

The half marathoners set off at 10am.  It was still overcast and drizzling and, for the first time in a long time, it was cold!  We set off down the towpath from Kingston towards Kew.  This was a flat marathon and it should have been really easy - but the towpaths were uneven - think compacted gravel paths, hugely degraded tarmac paths and sections that were muddy with tree roots and that was most of the path - interspersed with short sections of 'proper pavement' and cobbles!  It was the sort of terrain the looks as though you can just run without thinking, but actually you needed to concentrate to make sure that you don't trip.  Within the first few miles I'd seen someone face plant spectacularly in front of me!   The path was narrow which meant that going was slow at the start unit the field spread out a bit.  It was lovely to chat to other runners and enjoy what was rapidly becoming a very warm and sunny day!  While I was chatting with some other runners (@777epic - who are planning to run 7 marathons in 7 days in 7 continents) I heard another runner mutter 'I won't be beaten by a mother of 5!'  Hmmm… more of that later! 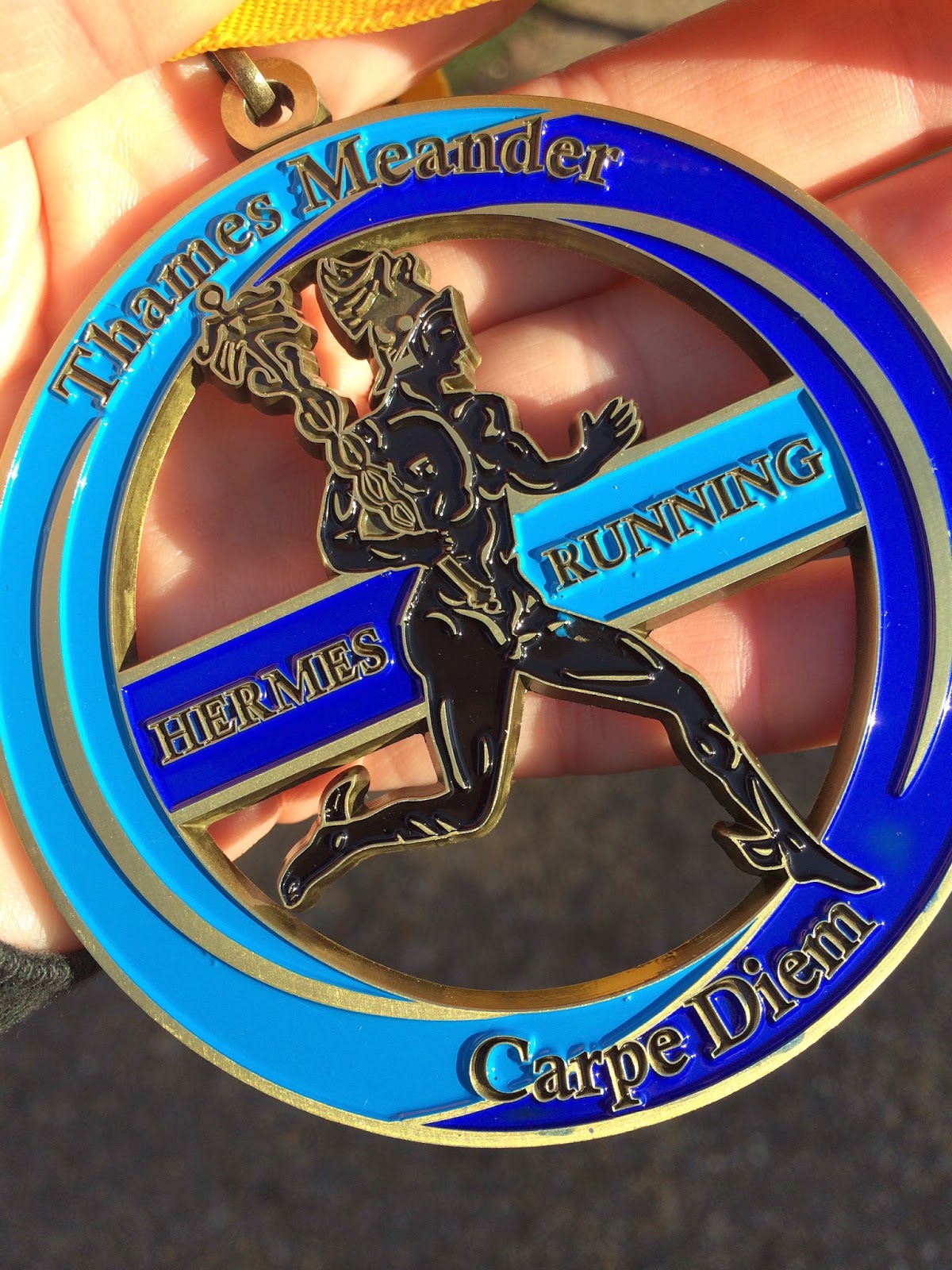 At the halfway/turnaround point I managed to mess up the turn and found myself running through a garden, then scrambling through a hedge to get back on the towpath.   The return leg was  a great opportunity to encourage fellow runners as I saw them.  This return half was much busier in terms of avoiding other towpath users.  Cyclists, walkers, scooter users and dogs (on and off leads) were in abundance.  I'm not a huge fan of dogs - especially when I don't know them and they aren't on a lead - I could feel myself pulling up short every time one got close.
At around 7 miles I was aware of the man who didn't want to be beaten by an old bird on my shoulder. He was working hard, breathing heavily, as he tried to keep up.  I wasn't working hard.  I decided to change gear and put some distance between us.  Even stopping for a drink at the drink station didn't allow him enough time to catch up with me.

The sound of bagpipes meant that I was approaching the finish line.  Bagpipes can carry a long distance, but I had lots of energy left, so I out on a burst of speed to finish strongly.   I was looking out for the children as I threw myself towards the line, but didn't see them!  I crossed the line in a chip time of 1hr 48mins 41 secs.  I'd have been thrilled with that a few weeks ago - but today I felt I could have done better.  I didn't need to stop at both the water stations to drink as I had a water bottle with me, messing up the turn about cost me time, as did my trepidation about the uneven ground.  I was gratified to find that I was the 18th woman to finish.  And it is another sub 1hr50 half time so I should be very happy.

There was a little bit of drama after the finish - we couldn't find The Fredster!  He'd gone off to cheer me at the finish, while the 15 year old had stayed in the cafe being a 15 year old grumpy girl!  I hadn't seen him and he had not seen me, so he just stayed where he was, about 300 m from the finish cheering in all the other runners while he wondered where I was!  It was only when a friend from Hatch Warren Runners finished and told us where he was that we managed to locate him!

The bling is lovely.  There was also lots of cake and biscuits at the finish - which was enjoyed in the sunshine before heading off home.  The event organisation was fantastic!  This is my first Hermes Running event, but it will not be my last.