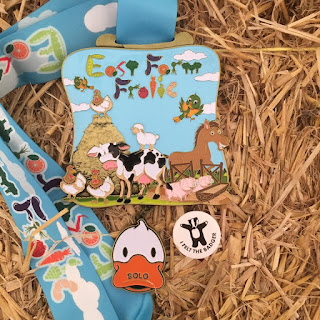 The doctor had never said that I shouldn't run.  All he had said was that I should 'take it easy,' so after a diagnosis of Whooping Cough and two weeks of not running I decided to give White Star Running's 12 hour challenge a go.  I had entered a few months ago as a solo runner, Husbando and 2 friends had entered as a team of three, so we were looking forward to a jolly day out in the Dorset countryside.  I sent my friend a text a couple of days ago saying 'It will be fun, I can walk a few laps and still get the bling,' but in the back of my mind I knew that I wanted to clock up another marathon - and that would be possible even if I walked the whole way.

After a hot and humid few days, Sunday morning was grey and drizzly.  The weather got worse as we drove down to Dorset (leaving home at 5.15am).  Of course, it was Bank Holiday weekend - so we had no right to expect sunny weather!  I thought back to the end of last summer - when I entered a Bank Holiday race - at least it wasn't that bad this year!  We consoled ourselves by saying that the past few days had been 'too hot' to run!

Arriving at East Farm, we unpacked the car (we had brought everything and the kitchen sink) and set up our table and chairs in the MASSIVE MARQUEE near the start.  Race numbers, timing chips and pink and purple rubber chickens were collected (yes, you did read that correctly!)  We assembled for the race briefing at about 7.45am.  This is quite possibly the only race brief that included a demonstration of how to inflate one's rubber chicken!  Teams were to use their chickens as relay batons.

I set off on my first lap, watching Husbando vanish into the distance ahead of me.  After two weeks of relative inactivity it felt good to be running, but it was hard work on my legs and my lungs.  I knew that if I was to survive I would have to be careful.  I walked the uphills from the first lap.  There were only 2 hills really and the second one was, in normal conditions, a very 'runnable' hill.  It suffered from the fact that you could see its entire length for ages before you got to it.  Anyway - I walked the hills, and they were in the first part of the lap, which meant that you got the worst bit done early on and could enjoy the rest.   As always, the White Star Running 'Lovestation' played an important role - and unlike most races we got to enjoy it multiple times!  The marshals were friendly and cheerful, remembering runners from previous laps and encouraging them to keep going.

At the end of each lap I popped in to the marquee to see who was there and have a cup of tea.  It was a wee bit chilly out on the course in the early stages and I looked forward to my nice cup of tea, I'd also get a bit of a sit down and a chance to gossip.  I met up with friends from parkrun and a lady I met at Salisbury 5,4,3,2,1 earlier this month.

Back out on the route, I kept remembering why I don't like trail running!  All these lovely views and all I was doing was looking at my feet to make sure I stayed upright.  And lots of the views were shrouded in cloud.  And it was raining.  And at the top of a hill where you turned a corner the wind was a bit chilly when your clothes were soaked!  As the day went on it did stop raining, and I changed out of my wet top into a clean and dry one.  The ground underfoot was 'claggy' - we ended up carrying half of Dorset round on our shoes. 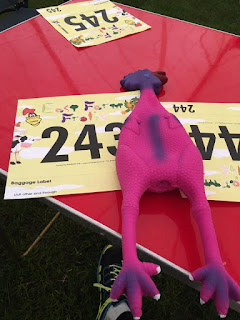 After one lap Husbando and I had a lunch break.  A quick trip to the hog roast stand, with me protesting that I couldn't possibly eat a whole roll and then eating the whole thing in record time, washed down with full fat Coke!   Husbando is adamant that I was slower on my lap than he anticipated and his team mate was faster than they had thought she was going to be and that he had to bolt his food, but no sooner had we finished our food than we were off again.  I think that this was my 7th lap - and the one I needed to do to get another marathon done.  About halfway around Husbando and his lunch parted company.  That slowed us down quite a bit, as I was uncharacteristically charitable and waited for him!   Not one single runner passed him without asking if he was OK.

At the end of this lap I carried straight on.  I had the impression that the rest of the team were ready to call it a day and I wanted to get one last lap in before we left.  If the weather had been better I am sure we'd have spent a lot longer there, but the weather was never great!  Anyway - I finished the last lap with a little spurt of speed that surprised the two blokes I was running with at that point (it is easy to put on speed when you have been taking it easy all day) only to find that I could have got a 9th lap in as the team had a lap and a half to go!    Still, 31 and a bit miles were in the bag - not to be sniffed at!


I collected my fabulous medal and goodie bag (lovely biscuits and my very own rubber chicken!) and grabbed another cup of tea.  The weather seemed to be improving at last, or maybe wearing a hoodie to keep me warm was working!  I was pleased to be at the finish to see a lady I'd run with for a while finish her first ever marathon.  I do believe that lapped marathons like this make running much easier.  It is far easier to think of running 7 laps than ticking off each mile.  And I am pretty sure that, left to my own devices, I would just keep on running laps thinking 'oh, I can manage one more' until I got timed out!

We had thought of staying over so that we could take part in the "Chaos Run" on Bank Holiday Monday, but hotel rooms were hard to find by the time we thought about booking and the idea of camping while not well did not appeal, so we headed home after a great day out.

Thank you to the WSR team for another great day out in Dorset.
Posted by MrsBridgewater at 21:24