London marathon, a tale of snot rockets, kittens and royalty. 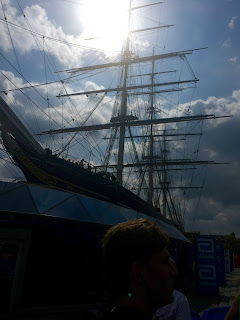 You know that bit in any race instructions that says 'do not race if you feel unwell, have a flu type cold or an injury?'  Does anyone ever pay that any attention?   I nearly did.  At 7.50pm, having struggled to walk the length of Shaftesbury Avenue while wheezing and coughing, I sent out a desperate plea, via Facebook, asking if it was possible to defer a charity place... I had 9 minutes to make the decision, if a deferral was possible.  The responses I got were of the 'Man up, cupcake!' variety, with a side order of, 'No you can't defer charity places.'  So it was off to bed with a dose of paracetamol for me.

Husbando and I were staying in London so at least we wouldn't have to get up at sparrow fart in order  for me to get to Greenwich Park for the start.  As an added bonus, the hotel we stayed in had decided to start their breakfast service early so that the marathon runners could eat before heading off.  I felt grim, couldn't taste my breakfast and swallowing toast felt like swallowing razor blades, but the only option I had was to run.... A 10am start to the race made for a leisurely start to the day.  It felt odd travelling to the start by myself - but there were plenty of other runners to chat to.  The Red Start was enormous, but once I'd located the loos, the baggage wagons and the start pens I was much happier.  The loo queues were something else!  From the end of the queues the loos weren't even visible! 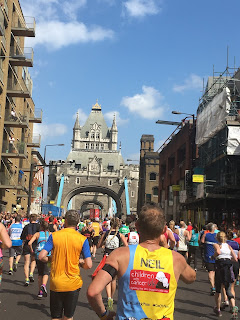 It took me 10 minutes to cross the line and a nice steady pace was enforced by the sheer volume of runners all around me.  From the start there were people lining the route and cheering us on.   The red starters don't merge with the blue runners until about 3 miles into the race.  I think the blue runners may have crossed the line faster than us, as suddenly I felt we were amongst runners who were at a slower pace, which added to the congestion.  It was good natured though, yes there were collisions between runners (I doubled up in agony after an elbow caught me awkwardly) but there was none of the ill mannered pushing and shoving that I experienced in Paris two weeks ago.  The weather was fabulous at the start, sunny but not too hot, but I had no expectations of running a good time.  For one, it was hugely busy, and for another thing I felt grim!  In my mind I planned to run the first half, hopefully see Husbando there for a quick chat, and then run 9mins and walk 1min for the rest of the race.

As it was, I saw Husbando with the Fetchpoint guys at around 14 miles, but there were on the other side of the road with the fast runners already coming back, so I plodded on!  At some point, I think about 16 miles, I did drop down to the 9/1 strategy, but got bored and managed to blast out two fast miles (8.02 and 9.09 minutes).  There was no way I could manage to run that fast for much longer today, but I wanted to see if I could manage it. Probably a silly thing to do, but it was fun.

I'd been anticipating that Canary Wharf would be quiet, and was quite looking forward to a respite, but there were crowds EVERYWHERE!  The noise was intense at times, the only quiet(ish) sections were in the tunnels.  I chatted to a few other runners, at one point telling everyone around me that I'd just had kittens!  It isn't often that you get a text with the single word KITTENS while you are running a marathon.  Another time, while talking, briefly, to a friend who was speeding ahead, a man said 'I just want to thank you for running for Treloar's - my son is starting there in September.'  He was running for Duchenne Muscular Dystrophy and (I think) wearing a cape.  There were very few of us running for Treloar's so the chances of the two of us bumping into each other were tiny.

At around 22 miles I was back at Fetchpoint to say hello to everyone, scarf down some cocktail sausages, hug Husbando and thank that Fetcheveryone community for the generous fundraising donation that made my run possible.  There was not far to go now, but after being virtually spot on for the first 9 miles, my Garmin was wildly out now,  it was reading up to half a mile more than the markers on the road said I'd run, and it seemed to me that the difference was just increasing as time went on.  I'd been hearing 'Toria' screamed at me almost constantly, so when I heard 'Victoria' shouted at around 25 miles I figured that it must be someone who actually knew me... I turned and saw a familiar face, ran back (not far - only a couple of metres) and gave him a hug.  I then realised that, yes I did know him, but possibly giving your Head of Year a hot and sweaty hug is not quite the done thing!  Sorry!  Still, it cheered me up no end to see him, and then another parkrun friend a few hundred yards later. 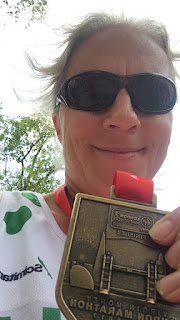 Suddenly we were running past the Houses of Parliament and the end was nearly here.  But, boy, Birdcage Walk is long!  I think it is longer than when I ran the Westminster  Mile there!  My impression is that I was overtaking more people than were overtaking me.  I certainly didn't give it my all today, I couldn't as I had a head full of snot and cotton wool, but the run did give me back a little of the confidence I have lost over recent races.  As we rounded the top of Birdcage Walk and ran past Buckingham Palace I picked up my pace a bit.  I could see the finish line.  And then it was over.  I'd done it.  Not my best marathon, by a long way, about half an hour slower than I wanted to be, but over 15 minutes faster than two weeks ago in Paris, without feeling as though I've worked anywhere near as hard!

I trundled through the process of getting medals, t-shirts and retrieving my kit bag.  I'd got my medal and walked (hobbled?) on when the woman behind me squealed.  I turned back and realised that the bloke handing out the medals, who had looked a little familiar, was Prince William!  Now that is a selfie opportunity I well and truly missed!  As I passed the baggage lorries I saw friends from my local running club - fabulous to say hello!

I made my way back to the hotel, Husbando had organised late check out, so I could have a shower and change before driving home.  What a brilliant idea that was!  All in all, a brilliant day out!

Huge thanks to everyone who has donated to Treloar's Trust, donations are still welcome... https://www.justgiving.com/fundraising/MrsBridgewater1?utm_medium=email&utm_source=ExactTarget&utm_campaign=20170303_96877