Do you think these signatures match? 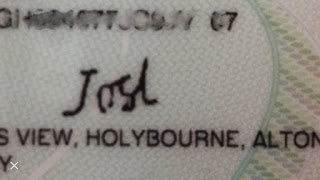 The signature on the right is taken from a photo of my oldest son's signature from his provisional driving licence.  I am that annoying sort of mother who takes photos of passports and driving licences because she secretly believes that all the children, and quite possibly her husband too - are idiots who would lose their heads if they weren't firmly attached.

Anyway, that licence went missing back in August 2017, Josh reported it missing to the police, along with the rest of his wallet, but as it was reported lost it was not a crime so therefore no crime number.  It has been a real nuisance him not having a licence, but the inertia of a student is hard to battle at a distance of several hundred miles.

A few weeks ago a letter arrived, addressed to Josh, forwarded on from our old address.  The one that appears on the provisional licence.  It claimed that Josh had not paid a fair on a Metrolink tram and had not paid the penalty fair within the time given and that therefore he now had to pay £150 or face appearing at a magistrates court where he would be convicted of a criminal offence.

I phoned my poor son up and gave him a bollocking.  He protested that he never used the Metrolink, I asked him if he was sure, he assured me that he was.  I said I'd phone up and find out what was going on. 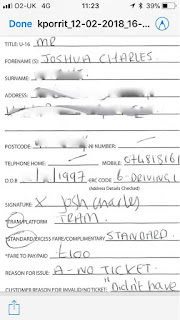 This is when I learned that the inspector on the tram had been given a driving licence as ID.  Apparently it was inconceivable that the inspector would accept a licence that did not match with the individual in front of them, therefore Josh must have been on that tram.  I pointed out that the licence had gone missing some months ago, and was asked to send a photocopy of his passport to support my assertion that they had given the ticket to the wrong person.  In return I asked for a copy of the 'penalty fare notice' and a description of the individual they had given the ticket to.  I asked if they had CCTV and I was told that they had CCTV for 'health and safety purposes only' (although they also told Husbando there was no CCTV).  I was told that they could not give me a description of the individual incase any of us recognised the individual and decided to 'take matters into our own hands!'

The copy of the penalty fare notice took some time to materialise.  We were about to pay up on the grounds that we could not prove that Josh was in a pub drinking his way through his student loan when it arrived.  I couldn't believe it.   (I've copied it here with surname and address blurred out).

Josh is dyslexic.  He has always signed his name 'Josh' - nothing more, nothing less.  And yet here was a penalty fare notice with him signing 'Josh Charles'  (Charles is one of his middle names, the only one that fits on his driving licence) in a remarkably fluid hand that bears no resemblance to the signature on his driving licence - which apparently was the document used to identify him, or his passport - which I had copied to send to him.

We phoned up on his behalf and pointed this out.  We were asked to supply more examples of Josh's signature - which we did.  Then we waited.  Confident that anyone could see that the two signatures did not match and that everything would be resolved.

Today we had a letter stating that 'we have reviewed the reasons why you were unable to provide a valid ticket/pass and based on the information you have provided, I can find no reason to reconsider out employee's decision to charge you with the standard fare charge.'    It also states that 'Our appeal procedures only allow for one stage of appeal, therefore we now consider this matter to be closed and would ask that you now settle the amount due on your standard fare charge.'

Hello?  Is it only me who cannot see that the two signatures do not match?  It is at times like this that I wish I had a good friend who was a solicitor who could write a suitably worded letter.  As it is we are at a little bit of a loss as to what to do next.  They maintain that the signatures match, I think that the 'signature' on the penalty fare notice shows far more similarities with the handwriting that completed the rest of the form than it does with Josh's passport and driving licence signature.  If this blog could get to someone with decent eyesight at Metrolink Manchester that would be a bonus!