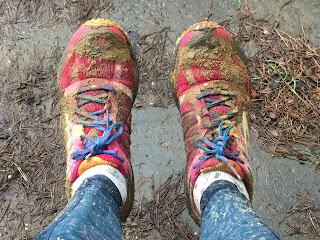 It has been a week of cancelations.  The Bath Half was a casualty of the 'Beast From The East' as were several local races and over 400 parkruns.  I was lucky that Basingstoke parkrun went ahead on a novel route, but I was worried that On The Whistle's Batty Bimble would fall foul of the weather.  I had no knowledge of the route, on Bordon's Hogmore Inclosure - a former tank training ground - so no real idea of how the weather would have affected the ground.  The thaw began yesterday and, by this morning, there was very little snow left.  I nearly didn't make it to the start line as our garden path was covered with a sheet of clear ice!

Safely at the start line, we looked at the ground.  Mud!  And lots of it.  We collected our race numbers, chatted to people we knew and listened to the race briefing.  I have run a couple of 10 mile runs in the last two weeks, so I was fairly confident that a half marathon would be fine.  Four laps would be child's play.  I had no desire to do any more than that.  Of we set - a downhill start and it was slightly muddy underfoot, but we were soon on a fairly good trail path through the woods - if it was all like this it was going to be easy.  It lasted less than half a mile before reverting to sandy paths covered with a thin layer of rapidly melting snow, a thin layer of rapidly melting snow that I feel I should add was up hill in places!  Not hugely uphill - but with the sand underfoot it was energy sapping work. 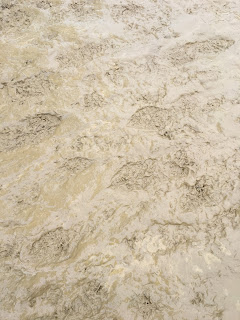 I ran the first lap with a lovely friend - I've run with him at a couple of event, but we were going a little too fast for my recovering body and sub par lungs!  Walking and talking is a huge challenge at the moment, I have to admit that I was quite shocked by how hard I was finding this route.  The Sun tried to shine on our first lap - which was pleasant and resulted in shedding of layers, something to be regretted when the sky clouded over and the wind got up a bit!  The route was 'out and back with a small loop at the end' - which was great because it meant you got to see people several times each lap.  One little lad who was spectating saw me on my 4th lap and shouted 'I've seen you a hundred times!' which made me laugh - sadly the race director wouldn't accept this as evidence of completion of a huge number of laps.
With the passing of laps, the remaining ice melted more, feet churned up the ground and it was a little like running through a thick, cold soup!  The conditions underfoot were possibly the most challenging I have run through, there were just so many different types of shoe grabbing, slippery, slidey slurry and sand to run though that I felt I was constantly having to concentrate on what I was doing.  There were a few bits of dry sand - but that just stuck to the mud on my shoes and added a bit more mass and removed a bit of grip!    After the first lap I decided to take it easy.  Run a bit, walk a bit, stop for a chat with anyone I fancied a chat with - try and spot some bats (they live in specially constructed structures on the Inclosure) and, er, enjoy the morning! 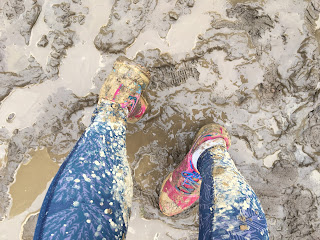 The aid station was well stocked and it was pleasing to see so many people bring their own water bottles and cups with them in an effort to reduce the amount of plastic that would need to be disposed of afterwards.  Less pleasing was some of the litter on the route - not from runners, unless they are drinking cans of Stella while running (and in which case it is most unsporting of them not to share) or running with invisible dogs while leaving very visible dog poo bags in the middle of the path.  I didn't see any runner related litter (gels, water bottles etc.) at all.

I stopped after four laps.  I had plenty of time to carry on and do a few more, but 13.1 miles is my longest run this year so far, and I wanted to stop while I was still, just about, enjoying myself!  I ran up the last slope and rang the bell - almost skidding as I came to a halt. I collected my medal, put on some warm layers and chatted while I waited for my friend to finish.
Excellent organisation - as ever - from On The Whistle, and a chance to be the first organised even in the Hogmore Inclosure!  I shall look forward to coming back when parkrun starts here (is starts next Saturday, but I won't be able to make it for the first couple of weeks).  It might be drier under foot then too! 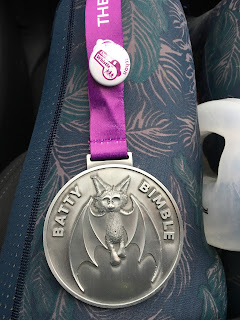