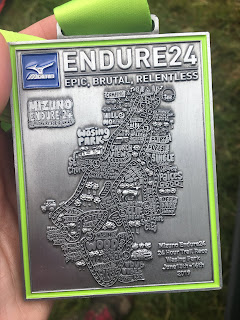 Endure 24, 'Glastonbury for runners' - or at least that is what the advertising would have you believe. I've only ever entered as a solo runner because the pressure of running to a timetable would be far too stressful.  I ran this event in 2016 and 2017, but deferred last year as I was recovering from pneumonia.  I'd convinced myself that I'd enjoyed these events, so a little bit of me was looking forward to 'doing some running' and spending time with running friends.

Sadly, the middle of June is one of the busiest times of the year for a teacher, so the build up for Endure24 had involved me staying up until 1am most evening writing reports and marking end of year examinations.  I had done no running at all in the week before Endure.  I felt more stressed than I can ever remember feeling in my life, while running is normally my escape mechanism, couldn't even begin to get my head around the idea of Endure24 this year.  So, preparations involved throwing some running kit into the back of the car on Friday evening (having relied on the lovely MrB to find us a camping plot) and getting a relatively early night.

I arrived at Wasing Park on Saturday morning. the event seemed much bigger than two years ago, found our spot in the 'solo runners' area and sat down to wait for 12 noon.  Mr B had a score to settle with his last Endure experience, but I had no real goals.  I was very aware that I hadn't trained for a 24 hour event.

Endure involves running as many 5 mile laps as you can within 24 hours.  You can do this as a small team (4 runners), large team (8 runners), pairs (male, female, mixed) or solo.  I've heard lots of people ask why anyone would want to run it as a solo runner and my answer is quite simple - if I am the only person running I can run to my own timetable - I don't need to run in a specific time, that and the fact that I don't have enough friends mad enough to be on a team with me!

At 12noon we were off.  The weather was... meh!  Not raining but not great.  We had a couple of major downpours during the first few laps and the ground underfoot was very slippery in places but I was bimbling along at a happy pace... walking up the hills and running the flats and downhills.  Fanstastic to see so many of my running friends and to chat with them.  Everything was going well until about 24 miles when it felt as though I had no power in my left leg and my quads starting telling me that I was an evil person for making them work so hard!  At the end of my 5th lap I stopped for a massage with Steve from North Hampshire Sports Massage which seemed to help and then set out for another lap. 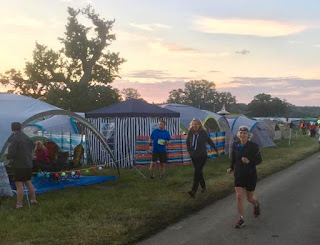 Finishing that lap, I found that Husbando and child #5 were at Wasing Park - so a welcome stop for food was called for.  We had 'second supper' at the end of my subsequent lap and then they went home.  I did another lap, taking my total for the day to 50 miles, had a quick chat with Mr B's children, another massage and then went to my car for a bit of a kip.  I'd suspected that I had a blister on my right foot since about 10 miles in so decided not to take my trainers and socks off and look.  I reclined the seat, grabbed my sleeping bag and set my alarm.  Three lovely hours of sleep - with only one interruption from my older daughter on What'sApp! 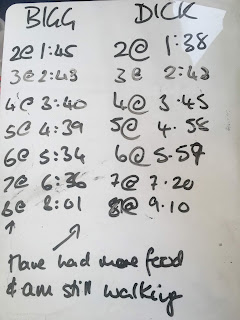 Fifteen minutes after the alarm went off I was out on the course trying to ease my legs into motion.  I'd found an alarming message on the white board MrB and I were using to communicate to say that he had been taken to hospital did wonder if I should do 'something' but in the absence of knowing what to do I decided to carry on 'running.'
I managed a bit of running but, to be fair, I don't think my 'running' was any faster than my walking!  It was also really cold out there.  It may be mid June, but I was wearing 3 layers, plus a jacket, gloves and a hat.  Breakfast, a Twix, a Mars Bar, a packet of salt and vinegar crisps, followed - then another lap - made bearable by walking with Russ from the Run MD team and then my penultimate lap in god awful weather with the very lovely Pauline.  The rain made already tricky conditions absolutely treacherous - I don't think I've ever seen quite so many people fall over in one race - and we didn't take much (any!) persuading to walk rather than run!

On my previous two visits to Endure24 I've managed 70 miles.  I'd love to have done more miles this year and, in theory, I finished 70 miles with more than enough time to go out again.  But everything hurt.  And discretion is, apparently, the better part of valour...I'd run the first 25 miles really easily and happily, but after that it was a battle of mind over matter, even lifting my left leg hurt towards the end.  What would I gain by running 75 miles?  Nothing much.

Given the state of my legs now, 70 miles was probably a mistake (and my feet are covered in blisters), but that is the thing about Endure - it is a mind game as much as anything.  I mean, who in their right mind sets out to run or walk any distance the day after they have run 50 miles?

PS:  MrB is fine.  He was released from hospital after they checked him out - apparently the excitement of seeing a place of freshly cooked chips was too much for him and caused him to pass out!

Thanks to all the marshals on the course, to all the other runners for their support.  Congratulations to everyone who smashed targets, vanquished demons and generally had a good time this weekend.  I'm pondering how I will get my shoes on for work tomorrow morning and wondering what the pupils will make of the fact that I have SOLO written in Sharpie on both my calves.....