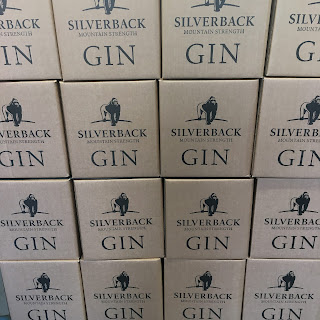 On a whim we booked ourselves into Gin School on Friday afternoon. Gorilla Spirits  is a distillery that is just down the road from where we live and not only do they make excellent gin (their Silverback Mountain Strength Gin gained top marks in a gin tasting I hosted a couple of years ago) they donate £1 to support gorilla conservation.  We'd been meaning to book a tour or one of their cocktail making masterclasses but decided to go for the Gin School experience as the idea of making our own gin really appealed.

We arrived at 2 o'clock on a sunny afternoon and were greeted with the first of several G&Ts which we sipped while we waited for the other four pupils to arrive.  Before long we were chatting away and ready to get started...

The process of choosing botanicals was explained, we each had a folder which described the characteristics of each botanical and suggested which other botanicals they would work well with.  We made our choices, safe in the knowledge that one of the experts would check our final recipe to make sure that it would work before we started meticulously measuring out our ingredients, recording all these measurements on our recipe sheet.  I had intended to make a 'Christmas Gin,' but got waylaid by the botanicals.  One was called 'Lady's Mantle' which is a plant that grows prolifically in our village, I liked it and decided to base my gin around it. 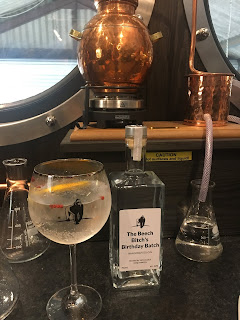 Each of us had our own still.  They all had individual names and were very cute!  While we waited for all the class to be at the same stage we enjoyed another G&T before being taken on a tour of the distillery.  This is a much smaller operation than Bombay Sapphire.  I think they said they had a staff of 9, everyone mucks in and does all the rolls that are needed, from monitoring the still to labelling the bottles.  After our tour we went back to the stills to work out the ABV of our distillate and therefore how much water we would need to add turn it into something that was a) drinkable and b) would satisfy HMRC's rules on alcohol content.  We had been asked to 'name' our gins - and these were printed onto labels.  The 'extra' gin that wouldn't fit in the bottle was used to make yet another G&T!  I have to say that Husbando's gin was very nice, but mine was delicious.  (I had to drink most of his drinks because he was driving).

All in all, this was a brilliant way to spend an afternoon and I can't recommend it highly enough!  We came home with out two bottles of gin, a bottle of the Gorilla Spirits Old Tom Gin and a bottle of their Raspberry Gin.  We got a 10% discount on our purchases and these two aren't as easily available as the original Mountain Strength gin.

I came home and went to bed.

On Saturday morning I woke up with a slightly sore head, but Saturday is parkrun day and we had made plans to meet a friend at Upton Court parkrun.  From there Husbando and I were heading into London.  I felt ghastly, almost as green as my 250 top.  Still it was only 5k, I've run parkrun with a hangover before, all I had to do was get around.  We lined up at the start and were soon under starter's orders!  Husbando hared off into the distance, I assumed JB had done the same.  I couldn't be bothered to look at my watch, it was hot, my head hurt and I felt a bit queasy so I just ran.  The course is one long then one short loop of Upton Court Park, it is mainly on grass, with a couple of sections on tarmac.  At one point during the first lap I got to a point where I couldn't see anyone ahead and it wasn't immediately clear where I should go, I stopped - very briefly - for another runner to catch me up so I knew where to go. 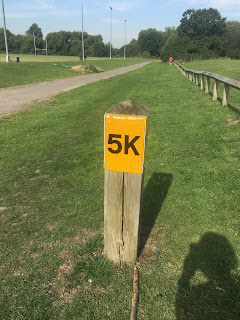 On the second lap JB caught up with me and we ran the rest of the course together.  It was really hot now and he wasn't going to let me slow down!  We passed a marshal who told up we had 600m to go - we thought he was a little optimistic - but as I looked at my watch (for only the second time in the run) I realised that I could be on for a PB!  Coming around the last corner two other runners came up behind us.  I wasn't prepared to let them overtake me, but wasn't exactly sure where the finish line was so just had to run as fast as I could and hope that I could hold on...urns out I could.  And I got an 8 second parkrun PB into the bargain!  Husbando also got a parkrun PB, but we both ran slower than JB's fastest marathon pace!

Such are the benefits of a flat parkrun!  There must have been some uphill as there was definitely a downhill slope, but I can't remember it!  The volunteers were friendly and helpful and we were very glad to grab some cold drinks from the rugby club house after our run!  There were also lovely loos in the club house that were available before the run and there is plenty of free parking nearby.  A great parkrun which didn't involve getting up too early!  Thank you to all the volunteers!