Another week over, another race done! 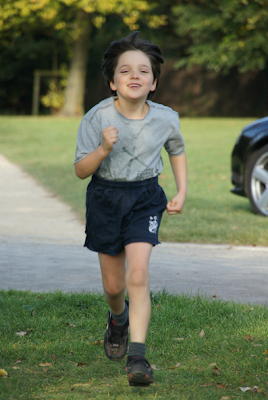 It has been a funny week. The last week of half term saw me suffering from a nagging sore throat and general lethargy. I decided, for once, to take the sensible course of (in)action and hold back on the running. After my long run (10 miles) on Sunday, I went out for a quick three miler on Monday but after that nothing! Of course, this lack of activity meant that I convinced myself that I would be totally unable ever to run again. I was sure my feet would refuse to work and that I was doomed to walk around the Fleet 10k route rather than running it!
Saturday morning saw me at parkrun anyway! I may not have been running, but two of my boys were! One of them for the very first time and aged only 7! He managed the entire course, didn't finish last and is keen to run again next week! My biggest boy ran a PB, taking 58 seconds off his previous best! I was glad I pitched up as volunteers were thin on the ground and husbando and I were both roped in to help (husbando en route to hospital for a scan on his dodgy Achilles!)

Sunday morning dawned warm and sunny. The only clue that we are in autumn was the colour of the leaves on the trees! I headed off to Fleet, husbando, enjoying his first Sunday off since I started work, decided to take the children to the cinema. I had arranged to meet up with a friend before the race, and she was one of the first people I bumped in to. The second person I met was one of my pupils who was a volunteer marshall for the day! They do say it is good for pupils to see that their teachers are real people with outside interests, I'm not so sure I want my pupils to see me dressed in lycra though! Amongst the throng at the start was the ever so speedy John M with whom we chatted for a while, and I spotted the exceedingly tall Andrew W as we massed for the start - he didn't spot me as I am only average height so get lost in crowds! John and Andrew are regulars at Basingstoke parkrun and I did spot other regulars in Fleet too - but I can't namecheck them as I don't know their names! It is always nice to see a friendly face at a race.
The race was chip timed but, strangely, only had a timing mat at the end of the race. So time taken to cross the start was not taken into account in the final times. The race comprised 2 circuits of the famous Fleet Blue Triangle. The route is described as 'undulating' but felt fairly flat, the downhills were long and gradual, the ascents short but fairly steep. The finish was deceptively nasty though. Uphill for the longest '400m to go' ever experienced and a winding route through a carpark. I over took loads of people in the last 400m, partly due to the hill but partly due to the lack of clarity as to where the finish was. Lots of people seemed to have stopped in the last 50 - 100 m!
I saw three more pupils on the way around. Great to get support from them. One was shouting out "Come on 134, come on 258" etc., as I ran past he called out "Come on 13... oh Miss it's you!" And at the very efficient timing chip removal and medal distribution another of my pupils was helping out. Great to see young people volunteering at these events! 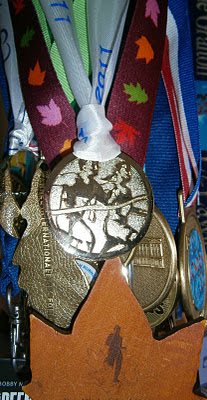 After the finish I bumped into John M, who had run a fantastic race! I was not hugely happy with my time. My Garmin had started beeping at me at around 4 K to tell me that it was 'Full' and that I needed to delete data. Not easy while on the move, so to stop it beeping at my I turned it off. I realised that I have become quite dependent on my Garmin to tell me how fast I am going. Without the information I just carried on at a comfortable pace, I knew I was under the weather, so wasn't too worried about times. My actual time was 50min 57 secs, which is 58 seconds over my PB. I do think that if I'd known my pace, and how close I was to my PB, I'd have pushed a bit harder and maybe cracked it!
The most demoralising part of the race was being overtaken by a man on crutches (or rather one crutch and one walking stick). He went off at a heck of a pace! At one point I was overtaken by a young man in plimsoles. I was on his heels for ages, watching his Achilles turn bright red as he ran! I decided that there was no way he was beating me - he was one of the people I overtook in the last kilometre!
A coffee and a catch up with my friend afterwards made for a perfect running morning (well, almost perfect, a PB would have been the icing on the cake!) We went to Cafe Giardino in Fleet. I have a discount card from the Basingstoke branch as we meet there after parkrun on Saturdays. I was stunned when the young man behind the counter had my coffee order (large, black Americano) waiting as I approached and was apologising that he didn't have any lemon muffins! That's what I call good service (well, apart from the lack of muffins!)
Not long now until the Great South Run! I am not officially running this for charity, but I have been amazed by the support UNICEF gave their runners for the Royal Parks Half Marathon, so I will wear my UNICEF vest to raise awareness if nothing else! If anyone does feel like sponsoring me, please feel free to click HERE!
Posted by MrsBridgewater at 14:04