I learned something today.... 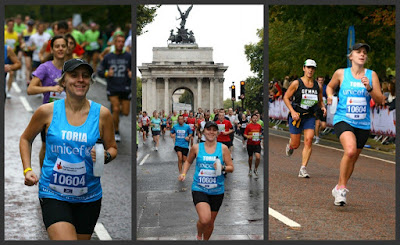 It has been a strange week for me with respect to running. Sunday was great, but I woke up on Monday morning feeling as though I'd been one of Hugh Jackman's ill fated robots in Real Steel! I am blaming an afternoon spent walking around the shops after the half marathon for this rather than the race itself. I survived Monday at school, but just barely. At that stage of the term everyone was tired and a wee bit tetchy, and there were still two whole weeks until half term! By Monday evening I was cranky as anything, and although my body was aching I decided to go out for a short run. I managed 2 miles in just under 18 minutes, I felt better mentally, but knew that if I pushed it any more I'd suffer physically.
I rested on Tuesday (well as far as you can rest with 5 children and a full time job!) and couldn't get out for a run on Wednesday because I had a parents' evening at school. What I didn't know was that there is a staff shower at school. In future I will take my running kit with me to school when we have after school events of this type and go for a run around the local ponds. On Thursday I escaped in time for a lovely, early evening run in the setting sun. I am so lucky to live in such a beautiful part of the world. I did catch a fair few flies! At least the cold weather of winter will mean fewer bugs over the next few months.
So, what did I learn today?
Well, I always have porridge for breakfast, but today I fancied a change. I had cereal and milk instead, and jolly nice it was too! I set off for parkrun (having had to scrape ice off the car before I set off) with the children in the car, feeling pretty good, if a little tired - my left ankle still thinks I made it do too much work last Sunday. I think that this is the first 'chilly' parkrun of the autumn - but at least it was beautifully sunny. I was absolutely fine for the first mile, and then I began to feel as though the contents of my stomach were curdling! I considered stopping, but it seemed a daft thing to do having driven all the way over to do the run in the first place. I plodded on, slowly, and was lucky to finish in just under 25 mins (24:50). A fellow runner tried to talk to me (as did my children) after the finish, but I couldn't concentrate on anything other than finding somewhere to sit down and regain control of my stomach contents! The humiliation of parting company with my breakfast in front of people is not something I want to tick of my BTDTGTTS list! Still, it is not a new PW (personal worst), I have merely equalled my previous PW!
As ever, thanks to the organisers and volunteers who make parkrun possible and successful. A friend asked me today (she was there for the second time) if I do parkrun every week. I think she thinks I am mad when I say that trying to ensure I get to parkrun is a priority for me. I almost cancelled a course as it has a 9.30am start in Birmingham on a Saturday, which means that I can't even do a local parkrun!
I'll be out for a long run tomorrow, so am hoping that the sunny weather lasts. I have Fleet 10k on the 23rd and the Great South Run on the 30th, so tomorrow will be my last long run before the Great South.
Posted by MrsBridgewater at 13:12