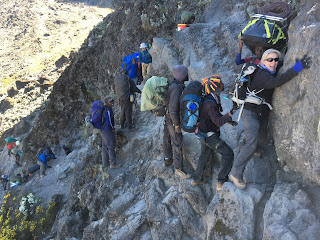 After a couple of false starts, one due to my workday alarm going off and the other due to a boy pooing his pants, we set off late for today's adventure. This was advertised as a '4K trek which includes the Baranco wall and the a gentle decent across the plateau to our next camp.' I think the trades description people might take issue with that!

It was steep - but that's fine!  What was not so fine was  the bits where I felt like I was doing a Tom Cruise impression!  Photographic evidence will be provided at a later date - but there is a picture of me looking almost as though I know what I am doing! I had the presence of mind to shout out to Stu, the summit leader who is traveling up with us, 'You better get a photo of this otherwise no one at home will believe me!'  I was well and truly out of my comfort zone and honestly don't think I'd have done it without the support of Al and Stu.  Even then, if there hadn't been the small matter of losing face with the boys I might still have chickened out! 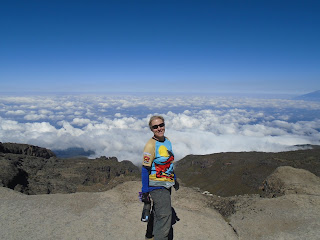 At the top we paused to catch our breath and to take photos.  The boys took great delight in standing far too close to the edge for my liking, so some bright spark decided that we should all sit with our legs dangling over the edge.  I was almost ok with this, as there was a ledge just below the edge, until Al pretended to pus me off!  I swore, quite loudly, much to the amusement of the boys and all the other people on the trail. Apparently he only did it because I was scared of heights (and I was never in any danger - he had a vice like grip on each shoulder).  I've tried telling him that I'm terrified of fast cars and expensive jewellery...

The promised 'plateau' never materialised.  At 3.5 miles into our 4 kilometre walk this hill lay between us and lunch: 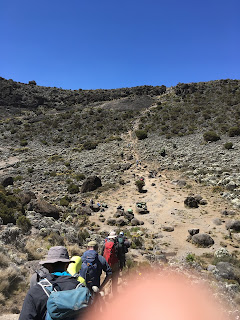 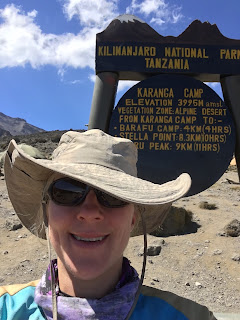 We made it though, the boys were in fine form today.  We are resting this afternoon as the next two days are tough!  This is my view from the rock where I am perched writing this: 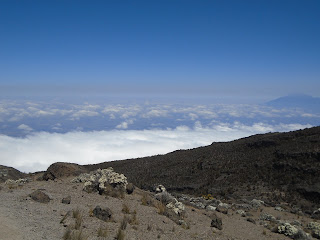 In other news, I spoke to SW who went down the mountain.  Our poorly boy was in hospital on IV fluids and antibiotics for most of that night.  He has 2 bacterial infections but is now recovering in luxury (hot showers and everything) at Weruweru Lodge.  It was lovely to talk to them both on our guide's phone - but it reminds me that this is no longer the trip it should have been.
Posted by MrsBridgewater at 15:47