Today was a day that I hoped wouldn't happen.  Our student, who was poorly in Monduli Juu, was ill again last night.  We all hoped that it was just something we had eaten, but as the day progresses (an easy 10k ish walk where we gained only about 200m of elevation) it was clear that he was still unwell.  His energy levels were way down, he had headaches, sickness and diarrhoea.

When we got to camp we put him in his tent, staying with him constantly, trying to comfort him while we assessed the situation and got in touch with the ops room. He was an utter star, he kept stating that he didn't want to let us down and that he felt bad that one of the teachers would have to go down with him if he 'failed!'  We reassured him that we had always known that one of us would have to go down and that we'd draw straws.  We joked that the prospect of a shower and the absence of dust and freezing temperatures at night was quite appealing.

For the record, we don't think he has altitude sickness. There is no doubt that his symptoms aren't helped by being up here, but they are exactly the same as in Monduli Juu.

While I was coaching him through his breathing exercises and allowing him to squeeze my hand when the pain was really bad (he says I should quit teaching and be a midwife), chatting about all manner of stupid things in an effort to distract him, my colleague was talking to the rest of the group.

Without consulting me he had informed them that he would be going down with our poorly boy.  I was furious and grateful in equal measure.  This was never going to be an easy decision, not least because we are good friends as well as colleagues and we both wanted the other to go up the mountain as much as we wanted to do it ourselves.  I called him a shit weasel and went off for a little cry, he went off to gather his thoughts while arrangements to get them down the mountain were made.

I couldn't be any prouder of the student, or any more gutted that his trek up Kili has ended. He is such a lovely boy who was a real asset to the group - as he has been to the school.  We had a group photo before he left - because getting this far was a huge achievement given how ill he has been, and we teachers had a photo too. 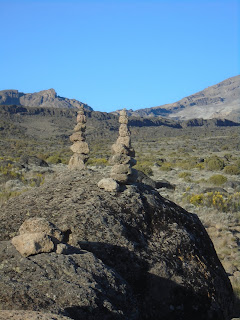 I'll miss them both.  Our expedition leader tried to soften the blow and my guilt by saying that the ops room had said it should be the male teacher who went down - but I'm not sure I believe him, and it doesn't take away from the fact that the shit weasel (it is a term of affection - honest) was willing to do it anyway.  I've cried a bit, and not just because he has half the Haribos we bought for the boys for summit day in his back pack, but now it is time to move on.

We went for a short walk before supper, just half a mile out, gaining 100m of altitude.  We sat for a while looking at the view - across the clouds to Mt Meru.

Our guide asked us if we wanted a group photo.  I immediately said 'No!'  It feels too soon  - the boys seemed to agree. 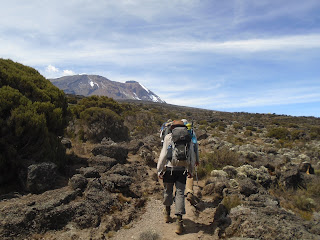 Tomorrow is another day.  We climb 900m higher to the Lava Chimney, before descending to camp about 200m higher than we are tonight.
Posted by MrsBridgewater at 15:22