I've already blogged about our arrival at Kipepeo Beach Village and the poor food we were served on our first night.  Suffice to say the food didn't improve and, to make matters many times worse, we were all bitten by bed bugs.  The management were most unhelpful - saying that no one else had complained about bed bugs (which is patently untrue if TripAdvisor is to be believed) and therefore it was our fault!

We went out side the resort for lunch and supper one day - much to the consternation of the staff who kept issuing dire warnings about how unsafe it was.  We were also, wrongly, told that 3 people had been 'robbed at knife point' just after we had walked back from our evening meal. 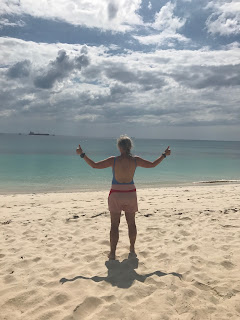 On our second full day we went snorkelling.  I have never been snorkelling!  We took a dhow out to a beautiful, uninhabited island where we walked around the coast looking into rock pools and collecting see shells.  We saw crabs and sea urchins and sea cucumbers as well as lots of fish.  We then got back onto the boat to go out to sea for snorkelling.  I was one of the first into the water... and one of the first out!  I am sure it is wonderful, and I know that with a bit of practice in shallow water (not 3m deep!) I could get used to not being able to breath through my nose, but swimming with 11 boisterous boys was neither the time nor the place!  I panicked and got out as quickly as my flippers would allow me to climb the ladder!

We then had lunch back on the island, before spending a pleasant afternoon 'chilling' on the most idyllic beach.  There are days, or parts of days, when being a teacher is a great job!

It was a bit of a come down to return to the resort and be served undercooked prawns for supper!

Some of the boys were struggling with the lack of structure in these final few day.  We tried to mitigate this by meeting for meals and having planned activities - whether it be swimming, beach volley ball or tent cleaning.  We were all looking forward to getting home.

On our final night we walked along the beach to the neighbouring resort for our final meal.  The resort was virtually deserted on the Monday evening, despite being hugely busy at the weekend, and we were the only people in the restaurant.  We had our best meal of the entire trip.  They had no burgers or pizzas, so the boys had to be a bit more adventurous in in their choices.  I had a crab curry which contained so much crab that I had to share it and naan bread.  I went to bed with a very full tummy that evening!