What day is it today?

I can't keep track of the days!  It is a bit like a week with a Bank Holiday in it but multiplied many times.

The absence of news from the outside world is wonderful.  I am resisting the urge to check the BBC news app in the hope that I will return to a Trump free world at the end of the month.

So what happened on a day where two of the three leaders were convinced it was Wednesday until at least mid morning?

It was another day of travelling, from Monduli Juu back to Weruweru Lodge just outside Moshi.  We had a hair raising journey in two minibuses to Arusha where we chartered a slightly less rickety and larger minibus to  Weruweru.  Our budget for the trip, which took 4 hrs, was US$5 per head!  Our drivers had scant regard for road safety and speed limits, but we arrived safely in the sanitised, idealised Africa that is the Weruweru River Lodge.  The highlight of the journey was the coffee stop at Arusha bus station!  We had very limited time, but the three adults managed to down two cups of excellent coffee and a cake each! 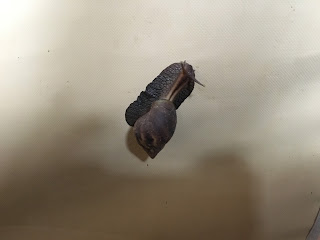 As we got off the bus our expedition leader announced that the boys were to put up their tents and then stay by their tents while the adults went to shower.  This would be our first shower for nearly a week and to say that we were looking forward to it would be an understatement.  That said, I can't say I would ever have predicted having a shower while chatting to a work colleague and a man I only met just over a week ago!  They didn't get to share their shower cubicles with a gorgeous African snail though!

The water supply may have been erratic - but feeling properly clean was wonderful!  Clean clothes and a lazy afternoon followed. 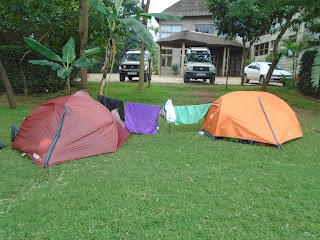 We've been here just over a week, but it already feels as though we have done so much.  There have been ups and downs along the way but, for the most part, the boys have been amazing.  And I could not have asked for better adult companions - I think we all share the same slightly warped sense of humour, and we seem to work well together.

We've had some issues with boys not eating properly, fussy eating means that some of them are not eating enough.  Here at the lodge they can buy soft drinks with their meals.  I suggested that they not be allowed to buy them unless they had eaten all their main course, including all the vegetables, one of the other adults announced this and my colleague enforced it - making him the most hated man in camp!  I nearly fell foul of this tonight as it was belly pork!

Tomorrow we have a day to prepare for our Kilimanjaro ascent, so that will be 8 days with no showers and no internet!  I'll probably have forgotten what month it is by the time we get back!  Now, is it safe to have a peek at the BBC news website?