How can you run your worst marathon ever but have the best running day of your life? 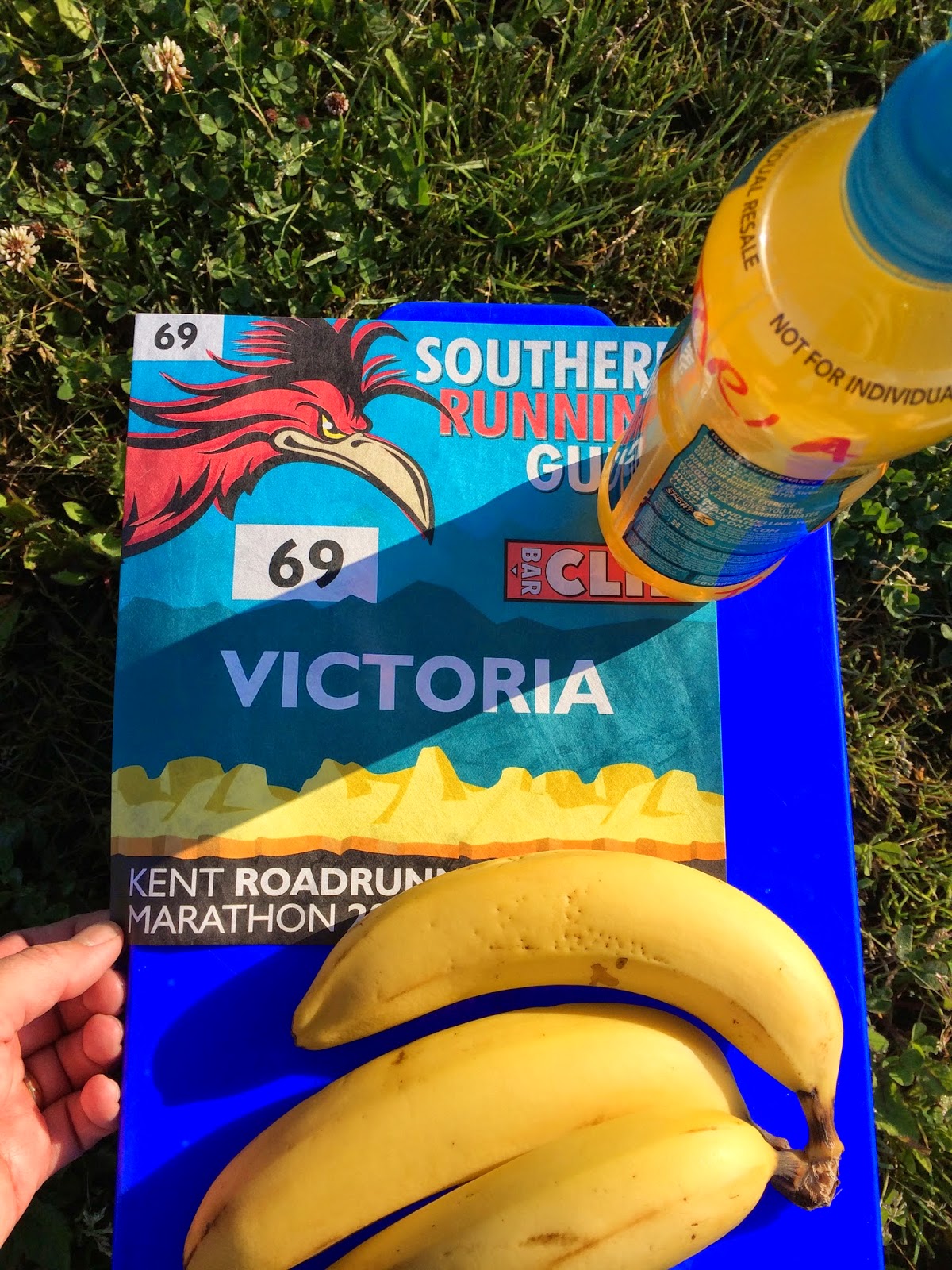 The answer to that question is quite simple.  Run a race organised by the amazing team at tzruns!  Brilliant pre race organisation which featured, but was not limited to, informative emails, choice of running number and booking of good weather, was complimented by an excellent venue, the friendliest and most welcoming volunteers at the start.

I pitched up at the start to collect my race number and set up my personal drinks station.  I don't really know why I felt that I needed to do this as the food stations at tzruns events are excellent.  I didn't eat any of my bananas and only had a few sips of (warm) Lucozade, but it does make one feel a little bit like an elite athlete to have a bottle with your name and number on it.    After getting that sorted, pinning my number to my vest and going to the loo (twice) I passed some time chatting with friends.  Every race I go to seems to add a few more friends to my circle.  When I think back to my first race in 2010 where I knew no one I can't help but wonder why I ever went back for another race.  I turned up, ran and went home.  Now I seem to know so many people that it is a bit like going to a party!  I am, however, useless with names - so if I forgot anyone's name today, or looked a bit blank, just put it down to my aged brain not being able to cope with the sheer number of names I have to learn at work every year!

At the start I felt fantastic.  I hadn't got any firm  goals for the day when I arrived, I was just going to see how it went.  The first few laps (of the 17) were great.   I was  ahead of where I needed to be to get a PB, well ahead.  I was smiling, confident and enjoying being back at  the Cyclopark.   I was eating up the laps, and really feeling for once as though I was born to run.    At 13 miles I was  still motoring.  It did briefly cross my mind that I had gone off too quickly - but I  still felt good, my legs felt fresh. 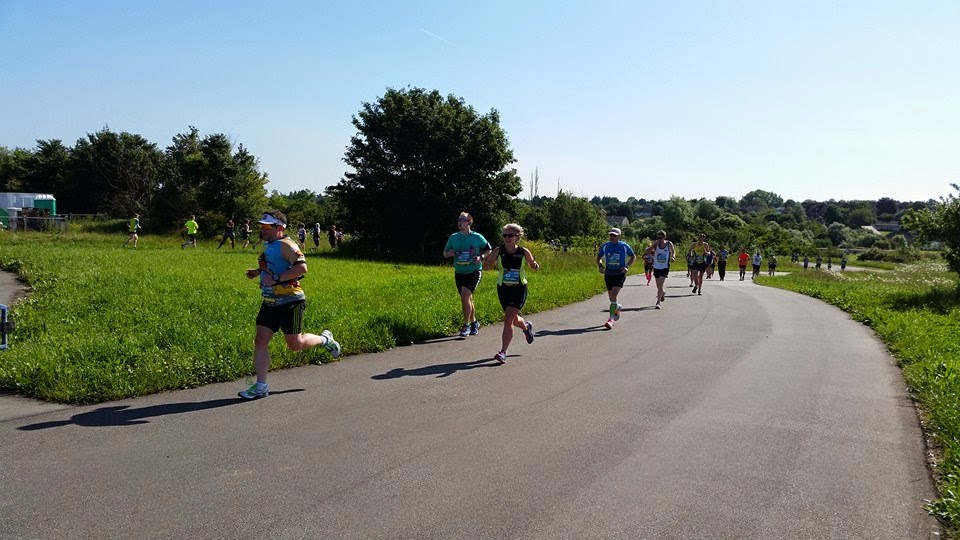 Then something happened.  I couldn't feel my right foot or, I realised a bit later, the outside of my lower right leg.  I hadn't fallen, twisted it, or done anything that I could think might have caused the problem.  I slowed down a bit.  I got to the start/finish zone and sought out a running friend who was volunteering.  I wanted to get some reassurance.  MrB suggested that my shoe laces might be too tight, so I loosened them.  I could move my toes, I could feel if I applied pressure to my foot, it was just oddly numb, and was affecting my running.  I considered stopping, convinced I had injured it somehow.  I asked MrB what I should do.  He asked me what I wanted to do, I wanted to finish the race and get that bloody big medal!  "Well, get out there, but take it easy!"  We'd already worked out that I could walk the rest of the race and still not be the last finisher.

I walked for a bit.  It was incredibly hard to walk when the rest of me felt so fresh and eager to run. I had a wee bit of a dip emotionally at this point, so gave myself a talking to.  I was kissing goodbye to a PB, so did it really matter now how long I took?  I realised that I could now approach this with a different mindset.  I could now chat to friends, pause and hug people and generally have fun.  And I did have fun.  When I managed to run my pace was still fast (for me!)  I still hated walking, but I soon realised that the heat had got to loads of people and there were many more walkers than runners in the final few laps. 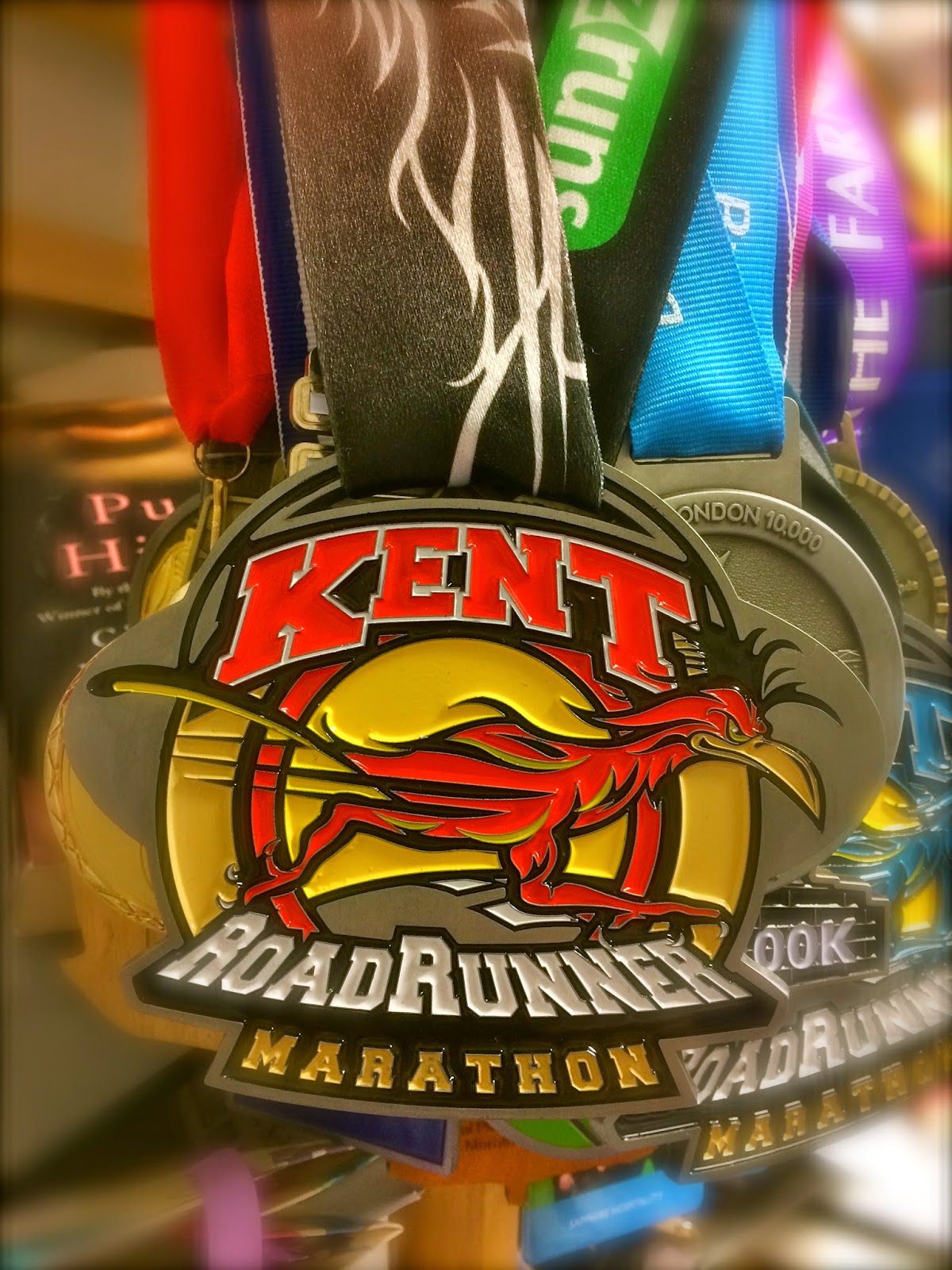 With 5 (I think) laps to go my walk a bit, run a bit, chat a lot strategy was working well.  Then my foot started to throb and itch.  I took my shoe off, expecting to find a putrid foot, or a the least some impressive bruising.  Nothing.  I looked again, and found a bite mark on the bottom of my foot and some swelling.  I can only think that something crawled into my shoe before I put it on and bit me part way through the race.  The relief at knowing I hadn't injured the foot I'd damaged 2 years ago  was great, but I was worried about causing any further injury with my strange running style.  As I got to the start area at the end of this lap I bumped into Sandra and asked if it was OK to leave the track to go and get some antihistamines, that was fine, so that's what I did.  Locating and rootling through my bag to get some drugs.  Sitting down part way through a marathon is not a good idea, getting going again was tough.

I finished in 4hrs 48 minutes.  My slowest marathon ever but I still feel really positive about the whole day.  The first half of the marathon went so much better than I had hoped. I ran with some great friends,  the volunteers were supportive and enthusiastic, the organisation was faultless, the supporters were vocal and the bling is AMAZING!   I have no hesitation about signing up to run this again next year - in fact I am stalking the tzruns website so that I can sign up as soon as possible.   It is a real 'runners' marathon' - the support and camaraderie from all the runners, from the front runners to us slow coaches at the back is second to none, it shows the running community at its very best!