These were the portentous words of Al, our expedition leader, one warm afternoon when we were twiddling our thumbs in camp at Monduli Juu.  We were well into our second bottle of Stoney Tangawizi by this point and even the sugar rush provided by a drink that really deserves a blog entry of its own couldn't lift the torpor we were feeling after yet another broken night of sleep and another morning of trekking in the heat.

I looked over the edge of my book and decided to leave Al and SW to play their silly games..... 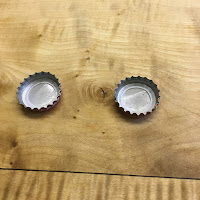 You start with a couple of bottle caps each.  Put them a flat surface - the boys improvised with a large book - with the picture side down, as shown in the first photograph.  Put them a couple of inches apart.  Exact measurements don't really matter.  From this point on they can only be moved with your thumb(*).  You can only touch your own bottle cap and you can only touch it once on each turn - no sneaky double tapping is allowed! 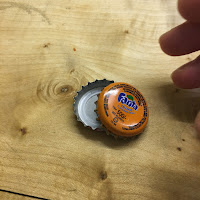 The aim is to flip your bottle cap so that it lands on top of your opponent's bottle cap with the picture side uppermost.   Any overlap, with the the pretty side of your cap showing is a win and means that you have won that round and so take possession of both bottle caps.  Play continues until one player has no more bottle caps left.  You can start with any number of bottle caps - but three each seems to make for a good game. 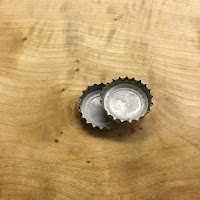 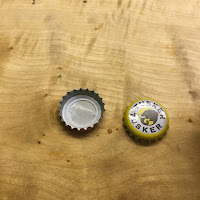 If you flip and miss your opponents cap and end up with bottle caps that look like this then you have lost and forfeit your bottle cap to your opponent.


It takes a while to master the knack of flipping the cap but as I watched Al & SW play against each other it was noticeable that they were drawing a small crowd of boys who were watching avidly.  In the absence of smartphones the game spread like wildfire through the group.  Whenever we had a few boys, a few bottle caps, a few minutes to spare and a flat(ish) surface a game would be started.  It is a great way to pass a few minutes and does get quite competitive.

Since returning home, I've taught it to my family, in fact Husbando and I spent 10 minutes playing it this evening while waiting for our curry to be served.  He's got the hang of flipping at last and we are pretty evenly matched now.  I love the low tech nature of this game, easy to play anywhere with minimal resources... and it is surprisingly addictive!

* If you are playing against a small child then you can let them use a finger rather than their thumb.