I need to fall in love again.

Have you been reading my blog for a while?  It is probably quite obvious that I like running.  I've planned my holidays around races and some would say that I am quite obsessed with running.  I've made so many friends through running and have been evangelical in extolling the virtues of running in general and parkrun in particular.

But, in the last couple of weeks I haven't been feeling the love.  My trip to Tanzania was something that I had looked forward to and planned towards for almost two years.  While far from being a holiday it was an epic adventure.  I'm left feeling a little bit flat now.  I am well used to the 'post marathon blues' that tend to hit on the Wednesday after a weekend marathon, this is similar but on a somewhat larger scale!

The post marathon blues can be cured by an extra slice of cake or glass of wine (or possibly both!) an internet connection and a quick browse of the races available.  15 minutes with a credit card means that the next race is booked and there is something to aim for... which is just as well given that cake and wine have been consumed!  The post expedition blues call for something more exciting.  Given that no one else in my family thinks that camping and walking up mountains is remotely enjoyable - Husbando is not known as the 'five star canary' without good cause - I will have to wait for the next chance to jump on an aeroplane with a group of teenagers!

Normally, when I feel glum, I put on my trainers and head out for a run.  Now running when we were in Africa was not really an option.  I had a couple of runs along the beach - about half a mile out and back because that is where I was stopped by security.  Out and back running, even on the edge of the Indian Ocean at sunrise, is dull!  It just wasn't safe to run in most of the places we stayed.  So, despite walking miles and gaining much altitude, I did virtually no running.  I didn't really run for four and a half weeks!

On the 'plane on the way home I commented to SW that I was really looking forward to running again.  The day after we got back I pulled on my running shorts and headed on out and up the hill outside our house.  Oh my word, what was going on?  I could barely make it a quarter of a mile before having to stop.  I persevered - completing a very slow 3 mile run with lots of stopping and swearing.  I began to dread going out for a run.  What was going on?

It has taken me over two weeks to realise that expecting to take a month's break from running and then to expect to be able to run as fast as I had before was unrealistic.  I ran a chatty parkrun with a friend on Saturday, she had a marathon the next day, so was happy to bimble around with me.  33 minutes for a 5k is never going to set the world on fire, but it was the first time I had run 5k without stopping since June! 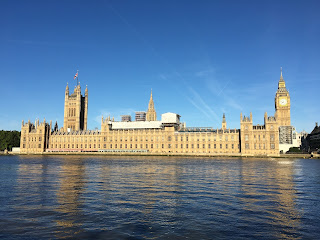 Sunday saw me up in London as Husbando had a book fair.  We leave home just after 5am which means that, once he's unloaded the car, I'm free to go for a run.  The weather was beautiful.  I set off with no real goal in mind other than enjoying myself.   I would run when I wanted to, stop if I felt like it, walk if I need to.  At one point I was running along the Embankment while a Polish walk racing athlete (I think he was one of the Blocki brothers) was training.  No prizes for guessing who was moving faster!

But, something was different.  Despite the fact that I was running slower than a race walker (!) - it took me an hour and a quarter to run about 7.5 miles - I was enjoying it.  The aches and pains (dodgy piriformis) were not hugely in evidence.  I wasn't really thinking about the fact that I was 'running' (one of the benefits of London being so flat), I was just enjoying being out in my home town in the sunshine, without the place being crammed with tourists.

So, I need to take it easy and ease back into running.  I haven't got any races planned until The Royal Parks Half in October.  I ran that race in 1hr 43mins a couple of years ago.  I doubt I will ever beat that time, even if I trained for it.  As is is, I'll try to remember that running is fun and concentrate on that rather than on pace and times.

And while I run I will plot my next big adventure...
Posted by MrsBridgewater at 19:42