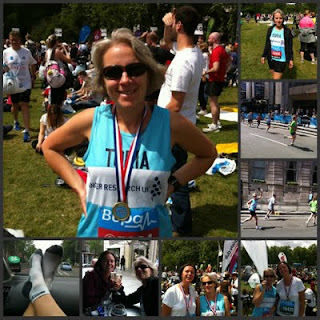 When we left the house this morning it was cold, overcast and rain was forecast. I was wearing long running tights and a warm top. I took my hat with me as well as my shades. It was still cold when we parked the car in London, but by the time we arrived in Green Park the sun was shining and it was starting to warm up. Apparently we have husbando to thank for this as he left his sunglasses at home.
We met up with my friend Sue before the beginning of the race, organised wallets, 'phones, kit bags etc. before saying goodbye to husbando and heading off to the start.
This is the second year I have run this race and it was just as well organised as last year. The start is split into 9 waves (3 each in red, blue and green). The organisers use previous or predicted finish times to allocate starting waves, and this ensures a relatively smooth start. While this meant that there was less bunching as we set off it did mean that I was starting at the back of the red wave and Sue was in the green wave, so we went our separate ways to await the start.
I like this part - before the hard work starts, when you can look around, chat with people and take in the sights! I was starting with a very brave gentleman in a Borat style mankini! The chaffing doesn't bear thinking about! The start was slowish, or maybe I was trying to go too fast. I ran a mixed race, averaging about 7.54min/mile. Slow points were around 5k where there suddenly seemed to be hundreds of people in the way, and trying to overtake was a nightmare, and coming back down the Embankment I realised the the green wave were running up the other way - so I slowed slightly to lookout for my friend. I don't think I saw her, there were an awful lot of tall, dark haired women wearing white t-shirts and black shorts!
I spotted husbando as I approached Trafalgar Square, he says I was looking like I had lots of energy still. At this point I passed someone whose husband was trying to encourage to keep going so I joined in with a bit of cheerleading. We were within 500m of the finish - I know how gutted I would feel to stop running that near the end. If I look back on all the races I have ever done, I realise I have spent a fair bit of time encouraging people. Running is a friendly sport, and winning isn't everything, but today I wish I'd been a bit more selfish! My watch showed that I crossed the line in 50min 01secs - so near and yet so far! Next time I shall have to try to run all out for me! On the other hand, I have beaten last year's time and still have an achievable barrier to break. I'll have to wait for the official results - they aren't due on the website until tomorrow at 5pm.
After the race we met up with Sue and went for lunch. A bottle of prosecco slipped down very nicely. Was lovely to catch up after far too long! I had planned to go for a bike ride when we got back home, but the rain was lashing down when we got back, so that novelty will have to wait for another day.
Posted by MrsBridgewater at 19:23