A few things I forgot to say yesterday!

So, as usual, in my enthusiasm to get everything down on paper I forgot a few things! Like husbando and I giggling in the car when the radio

presenter said that Paula Radcliffe was returning to racing after taking 18months off to give birth! That is one heck of a long labour! There can't be many sports where people like me get to compete against world record holders. It is hugely exciting to see the elite athletes running back up the Embankment as we set out (they were on kilometre 7, we were at kilometre 3).
The picture above shows my pace profile for the race. Not terribly consistent - every so often I had to almost come to a stop as the runner in front of me abruptly pulled up, or someone moved out into my path without checking behind them. I was going to blame these dips for not making it to sub 50, but the official time shows I finished in 49:59 - which is hugely exciting for me! I like to tell myself I run because I enjoy it, that speed isn't important, but I am too competitive to believe that - even if the only person I am competing with is myself.
Just after the finish line, when I was looking mournfully at the big fat 50:01 on my watch another runner came up behind me and asked how it had gone, and said that following me had pulled her through a couple of k. She thought I must be famous because people kept shouting my name (and me being me, I like to wave to people who call my name). Only when she met me at the end of the race did she realise that I had my name in letters on the front of my vest! 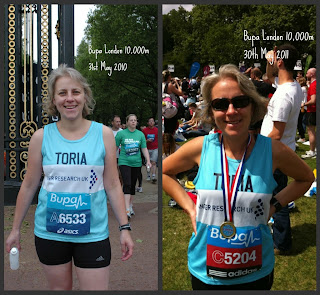 And, while on the topic of running vests, I wore the same vest as last year. I know I have lost 15lbs since the end of March (being cast out of the staff room at the end of teaching practice works wonders for the waist line), but I didn't realise how long I had been carrying the extra weight for. The pictures show me last year and this year. Yes, the sun and a bit of a tan help, but how I pulled those legs and arms around a 10k course in a respectable time (52:28) is a miracle! 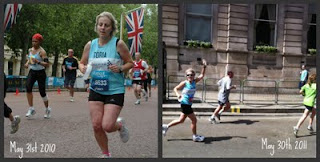 I am particularly pleased with my arms. I am very lazy and hate gym work, so worry about bingo wings, but it seems that running is working - oh and saying goodbye to legs like porridge is always a joy! I think I'll have to try and dig out some more comparison photos to scare you all with!
Today has been a busy day - I took the three younger children up to Leicestershire to stay with their Nanna and Auntie for a few days, then drove straight home (quick loo stop, no coffee - just enough time to get my toes licked by the new puppy) for an appointment with 'the foot man!' He is an amazing podiatrist - I think he is a wizard really - who sorted out my hip problems last year. We were going mainly for husbando, who has damaged his patella tendon, but it made sense to get my slightly twingy right calf checked out. I have a tiny new orthotic for the right shoe, my left orthotic remains the same. Husbando's orthotic has been tweaked - and made walking less painful. He has been told not to run for six weeks! Six weeks!! Then he is going to build up gradually to the Paris-Versailles.
When we got home, I set out for a 'slow, recovery run.' Lovely weather, some mellow tunes on my iPod, and a run through my favourite country lanes. I covered 3.75miles in 30 minutes - not sure what happened to slow, but it didn't feel as though I was running sub 8 min/mile!
Posted by MrsBridgewater at 19:45