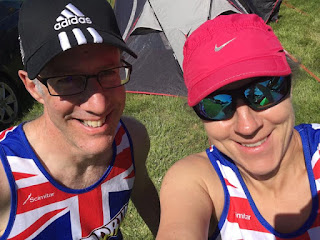 I'd been obsessively checking the weather forecast for over a week.  I knew where my tent was, what food I was going to take with me and which clothing I would pack.  In other words, apart from a lack of adequate training and niggling injuries, I was as ready as I could be for another Solo Endure 24!

Yet again, Husbando had a busy weekend (work, school fete, childcare, gardening) so I would be 'on my own' for the first day.  Not that it is possible to be on one's own at Endure.  There are so many familiar faces and the majority of them are bloody lovely!  I set up my tent next to a friend's on Friday evening, went to a Stewart Lee gig and then home to bed.

Saturday was sunny.  After days of looking at a forecast that promised rain we were now apparently assured a dry weekend.  Wet weather gear was swapped for sunscreen and hats.  After faffing around and getting a massage to try to loose up my piriformis and hamstring it was time to go to the start line.  There seemed to be far more people than last year, but as with last year the atmosphere at the start was amazing.  Starting near the back, and feeling quite exhausted (it has been a busy few weeks) it was easy not to go off to fast.  The sun was beating down, we were on our way up the 'Hill of no return.'

When it comes to setting targets, I am my own worst enemy.  I had wanted to defer my entry, but had missed the deadline.  I knew that I was not as fit as I had been last year and that the 24 hours were going to be really hard work. I desperately wanted to equal last year's mileage (70miles), but knew that this would be a tall order.   After three lap I wanted to quit.  Laps are a mental challenge at the best of times and, despite the fact that I was running at a good steady pace, my heart and head weren't in it and I couldn't see the appeal of running 11 more laps.  About this time I bumped into some running buddies and that changed my event.  Several renditions of 'I know a song that will get on your nerves,' (I only shifted that earworm by singing 'Bye Bye Miss American Pie' very loudly) and discussions about all sorts of things (more of this later, maybe!) helped the miles tick by.

My 'runners' Alzheimer's' was in full force.  People kept saying hello to me and calling out my name - and I was wracking my brains to try to match a name to the face.  I was convinced that I must be wearing one of my tops with my name on it - but I wasn't!  I do apologise if I looked a bit vague at times.  Between laps I was the Queen of Faff!  I probably wasted hours trying to decide if I needed to go to the loo or not, whether I wanted to eat or not, change my shoes or not.  I also worried about a friend who was not having a good time.

I wanted to complete 45 miles before bedtime, after 8 laps (40 miles) I was flagging.  I decided to walk the next lap and was joined by a friend who was here to support members of her running club.  We hadn't seen each other for a while and it was great to catch up!  She sets a cracking walking pace and we saw the famous Forest Faries! After that I had a massage and, just after midnight, retired to my tent.  I timed this to coincide with the portaloos in the solo area being serviced - a lovely aroma and noise to act as a lullaby.  I decided to allow myself 3.5hrs sleep with the aim of being back out again in 4 hours.  I may have been lying down, but I didn't get much sleep - the solo area is near the track and all night there are team runners calling out to try to find the next team member.

Then it started raining.  I think that may have lulled me to sleep, but it was still raining when the alarm went off at 3.30am.  This meant that long tights and a waterproof were needed, not shorts, but the condensation inside my single skin tent meant that I was likely to get soaked if I tried to change in the tent.  I retired to my car and contorted myself into long tights while sitting in the driver's seat.  It would have been much easier to do this in the passenger seat - but I didn't realise that until I was half into my tights!  As I got out of the car the bloody rain stopped!

That first lap on Sunday was tough.  I was so tired that I was falling asleep on my feet.  I got back to the car, wiggled out of long tights and back into a pair of shorts, and texted Husbando to say that I was going to have a 20 minute nap before going out again.  He said to wait for him because he would be here in 40.  I was asleep within minutes. 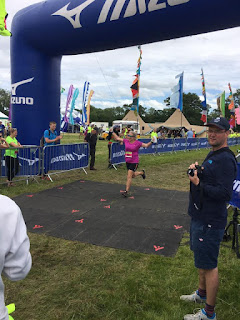 The last four laps were much more walking than running, accompanied by Husbando, we maintained a fairly brisk pace.  My legs were too tired to even attempt to run on some of the more uneven sections.  My feet were burning.  Every footstep was painful.  My brain could barely compute the 5x table.  This lead to great joy when I realised I only had two laps left to do not three!

The last lap seemed to take forever, but as I zig zagged across the field at a shuffle and turned the corner to approach the finish I could see that there was no one between me and the finish arch.  There were loads of people around the finish so I couldn't carry on shuffling - I had to put on a burst of speed.  I felt as though I was sprinting, I probably looked like a three legged donkey, but I heard the commentator name check me and he said that I was sprinting so it must be true!

At last it was over!  I was so happy to be able to stop.  I eased my trainers off, peeled my socks away from my skin and realised why I was in so much pain.  Blisters!  I don't get blisters!  But today, maybe because of the heat I had a life time's supply.  Blisters on the side of my feet, the base of my feel, under my heel and between my toes!  Putting on flip flops was painful!

Thank you to everyone who helped me through the last couple of days!  You are all awesome. 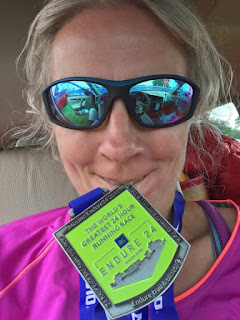