Shoe shopping is quite different here.

Not sure how well the boys slept, but I got loads of sleep - despite being convinced that the rattle of the fan would keep me up all night!

I was worried that today would feel like a wasted day, but I had forgotten just how long it sometimes takes to complete even the smallest tasks when one is out of ones comfort zone.  The aim of a World Challenge expedition is that the challengers make their own decisions with the adults there as back up and support.  This is a huge learning curve for any middle class child from Surrey when they find themselves in Tanzania, it is even more challenging for our boys who all have specific learning difficulties.  They are doing really well - although timekeeping is something of a challenge!

We had various things we needed to do, get a SIM card for the group phone, discuss the budget, organise food for our journey to Moshi, work out which safari everyone wanted to go on and discuss how we could afford it.  This, and lunch, kept us busy until mid afternoon.  We had lunch at 'A.Tearoom'. That's what it was called - although unlike any English tearoom.  They boys are all bravely trying new things, which is great to see!  I'm struggling to find anywhere that serves diet soda - I'll be the size of a house by the time I come home! 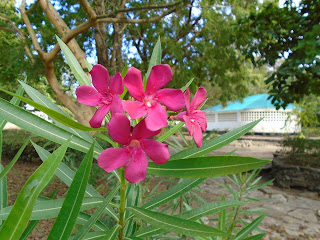 In the afternoon, with time to occupy, we walked to the  Botanic Garden.  Kew Gardens it was not!  Some interesting trees and wildlife, but we had to leave quite quickly as we were pestered by some locals who said we needed to bribe them if we wanted to be there.  Aparently the debate got quite heated - I had moved the boys away and was allowing the other two to deal with the situation!

Still, we had a lovely wander through the city, noting the changes from the busy centre to the quieter parts where all the government ministries are located,  It is bizarre to see shoes being sold in the turning circle outside an office block! Due to economising at lunch time we had a budget of 20,000 Tanzanian Shillings a head for dinner.  That's a bit less than £10 each.  After finding a restaurant that could seat 14 (not easy!) we were able to order huge amounts of food and still have just under100,000 shillings left over!

The planned early night didn't happen! Hopefully the boys will all be up bright and early as we have a bus to catch....