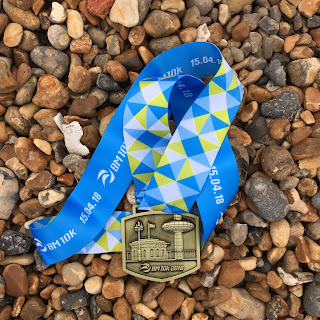 Up even earlier than yesterday to return to Preston Park for the start of the 10k. The traffic was heavier than yesterday, due to road closures and the whole world seemingly trying to get to the start line.  Thankfully I wasn't driving today, four of us were travelling together and one of our number knows Brighton well.  He wasn't phased by the diversions and got us to the parking he had arranged safely.  We grabbed a coffee and used the loos in a nearby Starbucks, probably lingering a bit too long there as we then had to route march to the park.

We arrived just 15 minutes before the start, then had to run through the thronging marathon runners across the park to the bag drop, then back across the park to the 10k start.  By this point Husbando and I had become separated from our friends, so headed on into the red starting pen.  There were just two pens, one for those anticipating finishing in 60 mins or under and another for those who were going to take longer.  We were late joining the pen - just a minute before the start time, so were pretty close to the back of the pen 'up to 60 minutes' pen.  The race was started by Paul Sinton-Hewitt CBE (founder of parkrun and all round good egg), who was still on the starting line waving and greeting runners as we passed the start.

I ran with Husbando for the first mile.  His natural pace is much faster than mine and, even when he is slowing down to run with me, it is a bit faster than I feel comfortable with at the moment.  We spent the first mile overtaking people, loads of people.  There were so many people wearing headphones - blissfully unaware of the runners around them - making it really hard for people to overtake them.   I don't know why people run races with headphones in.  I train with music (or an audio book) but part of the buzz of a race is soaking up the atmosphere, listening to the bands, striking up conversations with strangers etc. Anyway, each to their own I suppose.   After the first mile Husbando went on at his own pace while I settled in to 'just get round.'  It is a long time since I ran a 10k or a road race, and after a winter of ill health I had no idea what to expect.  I'd set myself a goal of 54 minutes - which required me to run just under 9min/mile pace I was running faster than that,  I ran the first 5k faster than I have run any parkrun this year (despite a short, sharp hill at about 3.5k in). 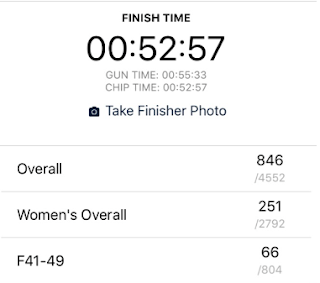 The route was interesting, running past parks and through residential areas before returning to the sea front with a nice out and back section.  I ran the out section looking out for Husbando eventually spotting him shortly before the turnaround point.  We tried for a high-5 but I ended up slapping him in the chest.  I spent the 'back' section looking for our other friends... they must have been there but I missed them.  This part of the race was lovely - a nice straight line, ever so slightly downhill and the end was in sight, well not exactly in sight, but I knew it was there!  I'd spent the entire race overtaking people, but put on an extra bit of pace, only belatedly spotting the photographers when it was too late to pull in my stomach and smile, in a sudden desire to cross the line in front of a few more people.  I stopped my watch after I crossed the final timing mat - and noted that it read 53 mins and a few seconds.  I was thrilled.  Even more thrilled when I got the official time.  It is still a long way off my PB, but faster than I'd anticipated.  Husbando ran a tad over 49minutes - his dodgy knee holding out well. 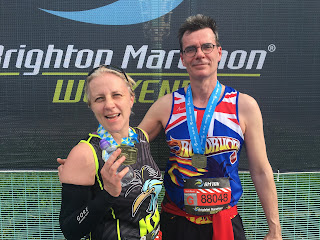 We collected out medals, our alcohol free beer (tasted nice but left a strange after taste best taken away with real beer) and posed for photos before collecting our bags and wandering back along the beach where we, eventually, met up with our friends.  Lunch followed (pizzas and beers at Franco Manco) then coffee at the very excellent Marwoods (a place we would never have ventured in to if it had not been recommended by one of our group).  We met one of the owners and had some of the best coffee I have ever drunk.

Then it was back outside to try to spot my daughter.  The whole reason we were in Brighton was to see her and cheer her on.  We missed her at the first place we wanted to see her (a glitch in the tracking app meant we were off with time) so we headed to the 25 mile marker and spent an hour and a bit shouting at random strangers, and a few familiar faces, before we saw her coming around the corner.  She looked amazing, and a bit cross!  'Where the f*cking f*ck were you?' was her greeting before she powered off towards the finish line!  She finished in just over 5hrs.  I am incredibly proud of her!  She ran for Mind and has raised over £1000 for them already.  I won't say too much about her race - mainly because she is off drinking with her friends now, and it is her race to talk about if she wishes, but if you want to donate to Mind you can donate by going to her Just Giving page.

All in all, this was a great event.  If I wasn't already booked on 14th April next year I would be signing up for the marathon.  The atmosphere was excellent and the organisation was good.  What's not to like?