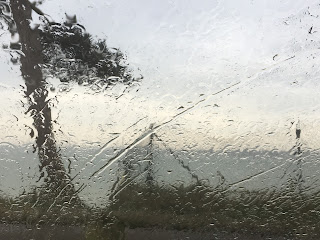 Yesterday afternoon I had no idea where I would be parkrunning this morning.  Then we invited friends over for supper and a plot was hatched, by two of us, to go to Netley Abbey parkrun.  I had a sleepless night, my oldest child had friends over in advance of his 21st birthday today and, while they were very quiet, I was aware of them moving around.  Added to that, Husbando was up at 4.30am to go to a book fair in Bath.  Despite this I managed to be awake and ready to leave at 7.45am, having checked the forecast when my friend arrived.  The forecast for Southampton promised that it would be dry until 10am.

I was not impressed to arrive in the rain, but there was little we could do, and after we parked, paid for our parking ticket and debated trail or road shoes - one of the volunteers said trail - the rain had eased off and we joined the regulars near the finish.  Today's tail runner came and said hello and pointed out where the first timers' briefing was - we listened attentively - although left and right as JB will testify are a mystery to me at the best of times let alone while running.  All I needed to do was remember that it was three laps, with two hills in each lap, and to follow the person in front. 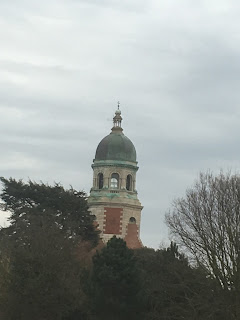 At the start line I put myself in the middle of the pack, but was actually behind the 30 (and possibly the 32) minute pacer!  The start was a quite slow, the field soon spread out.  The winter course at Netley Abbey is an 'out and back with loopy bits!'  I do like a run where I can see other runners coming towards me.  There were two uphill sections on the first half of each lap, followed by a long downhill section.  The course was mainly on tarmac, with lots of puddles, and a short section on grass.  We went through 'Bluebell Woods' and along the shoreline.   Trail shoes were not really necessary.

Towards the end of the second lap I lapped the tail walker and was lapped by the first finisher - at the same time!  The first finisher completed the run in 16:58 - nearly two minutes faster than the next runner.  I finished in just over 26 minutes - I might have been faster if I hadn't almost lost my barcode wrist band when taking off my running jacket.  I was thrilled to get my first top 100 finish time in a very long time. 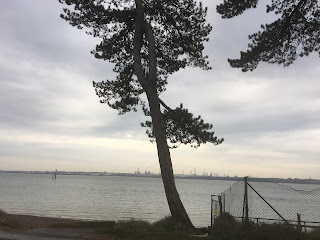 Having had our barcodes scanned, we asked the friendly volunteers for directions to the cafe - just a few minutes walk away - where we had a quick coffee while finding out that Royal Victoria Country Park was the sight of the first purpose built military hospital (Royal Victoria or Netley Hospital) which opened in 1863.  At one time it was the largest hospital in the world.  Now only the chapel remains.   There is also a railway in the park - the Royal Victoria Railway.  I'd spotted the tracks while we were running - but was doubting myself as JB had not seen them.

This is definitely a parkrun that deserves a second visit - I'd love to go back when the bluebells are out and it would be good to run their summer course too.  Thanks to all the volunteers and to my driver for the day - sorry for my dodgy left/right directions!