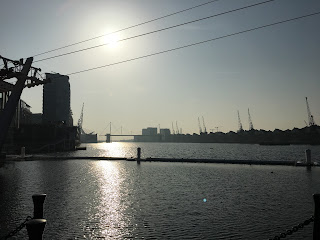 What a beautiful parkrun!  I haven't done many London parkruns - but this one must be up there in terms of scenery - but before I wax lyrical about Victoria Dock parkrun let's just back pedal a bit to explain why I found myself leaving the house at 6am on a Saturday morning.

This is, of course, the marathon weekend.  Apparently there are other marathons, but London is the only one that seems to count.  This results in thousands of runners and supporters converging at the Excel for the expo to collect their race numbers and try to resist the pressure to spend money on yet more running kit.  The local parkruns see a huge surge in numbers and, when looking at social media, it became clear that a fair few people I know but don't see often enough were planning to visit the relatively new event in Royal Victoria Dock.  I had no reason to be in London.  I had less desire for an early start, but somehow my wish to see people again won out and I found myself setting the alarm for 5.30am! 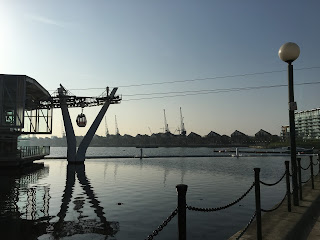 I chose to 'let the train take the strain' (I seem to think that this catch phrase may have been used in an advertising campaign featuring the late, unlamented, Jimmy Savile - but I have no desire to Google him and find out).  I'd planned this after nearly falling asleep driving to Brighton last week - and then stayed wide awake all the way to Waterloo!  The day started to look up when the lady in Pret A Manger  gave me a free coffee which I drank on the Tube.  Walking up onto the DLR platform at Canning Town I spotted a familiar pair of legs and a 250 top.  I tentatively called her name - not 100% sure I had the right person as I haven't seen her in years as she's been in New Zealand for ages now.  It was her - possibly the speediest female runner I can claim to know, but so supportive to plodders like me.  She'd made a bit of a schoolgirl error though, and left her barcode in her hotel room - so I offered take her bag to the start while she jogged back to grab it. 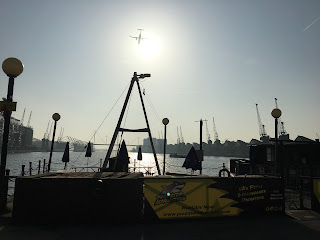 The start was easy to find - at the end of the dock!  There was a sea of apricot t-shirts and a smattering of familiar faces.  VD parkrun (and if anyone is qualified to abbreviate the name it is I!) have use of a 'community hut' which is a brilliant place to store kit, leave bags and there is a loo too!  Just the one - which on a normal week is more than sufficient, this week I figure there were more people queuing for the loo than ran there last week.  Being British I joined the queue! 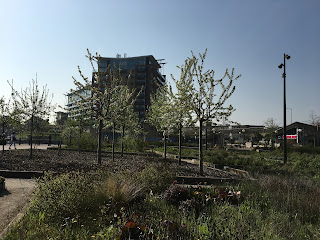 The dock is underneath the flight path for the City Airport and the cable car - the closest public transport to the start line is the Emirates cable car stop.  We had clear skies and warm weather, the beds near the the start were beginning to bloom, the views along the dock were stunning.

We massed at the start - behind a line of bollards and were soon off.  The first part of the route featured a lot of bollards, and much hilarity about bollards ensued.  The route is U shaped, starting and finishing at the base of the U, which means that you get to see lots of runners coming back towards you.  It is all on paths - with a variety of surfaces, possibly more cobbles than there were in the Paris marathon and definitely more than in the London marathon!  It is as flat a pancake, which made for lots of speedy runs today - my first sub 25 minute parkrun for ages included!  The geography here means that you are going to get some lovely headwinds here - but only for half the run - the breeze today was quite welcome as it was warm this morning.  And the views!  Wonderful!  We ran past a floating hotel, warehouses converted to flats, a couple of utilitarian hotels and the old dockside cranes as well as the newly landscaped area near the start, but all the time we were by the water and there were aeroplanes flying overhead and cable cars bobbing backwards and forwards.  Stunning! 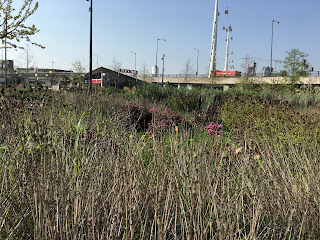 Hats off to all the volunteers today.  This was their sixth event and they coped brilliantly with the surge in numbers (93 last week, 252 this week).  The marshals were friendly and encouraging.  Free coffee was available at the finish - a lovely touch as the local cafes didn't seem to be open yet and my results email came in before I finished my train journey home.  For those interested in tri training, I noted that there was hut where you could hire wetsuits to swim in the dock.  Even as a non swimmer I have to admit that this looked tempting today.   All in all a lovely morning out - lovely to see so many parkrun friends and meet new people.