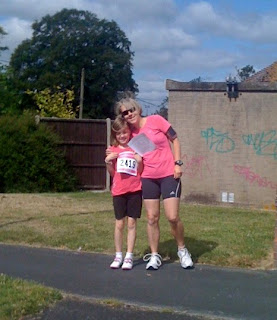 I 'did' Race for Life with my daughter today. I don't think I will do it again. It may have done great things in terms of fundraising and raising the profile of running in this country, but it is not a good event to do if one actually fancies running!
The organisation today was awful. The PA system was inaudible from where we were standing. The start was chaotic. We had three starting groups, runners, joggers and walkers. That seems like a nice, logical distinction until you start to think about it. Last year I dithered between the runners' and the joggers' groups. Was I running or jogging? I knew that I could run 10k in 52 minutes - but was that technically running or jogging? And how fast would my lovely daughter be able to run? Jogging seems to be a somewhat derogatory term so I chose to plonk myself, and my daughter, in the runners group, as we did this year the friends (also a mother/daughter combo) with whom we were running.
We crossed the start line just over a minute after the start and immediately encountered groups of friends who had yet to learn the difference between walking and running! Why start in the runners' group if you are not even going to run the first 5 meters? And because you are running with six of your friends, why not walk six abreast (if that is not a heinous pun when talking about Race for Life) so that those people who would like to run can't pass you? And why have a 'walkers' group' in something that is called a 'Race?' If you want to walk for charity then do a sponsored walk - there are plenty out there! I'm not denigrating walking at all - I have running friends who have taken part in various walking events and tell me that walking is far harder than running, but a 'race' is not the place for a leisurely stroll!
As we went around the '5k' course this was a repeated problem - lots of walkers, lots of spectators on the wrong side of barriers (I came around a sharpish bend and bumped into a bloke with a camera - he swore at me for not looking where I was going, but I hadn't expected to encounter a totally stationary person!) people 'running' in flip flops!
I ran the first 3.5k (or thereabouts) with my daughter and her friend. It was s-l-o-w going! I may have had a few days off, but the pace was far too slow for me - I ended up running on and then back to meet them a few times, and running backwards so that I could make sure I knew where the girls were (I was not running backwards when I collided with the spectator!) Eventually I could stand it no more! I called back to the girls that they were to stay together, not talk to strangers and that I would meet them at the end, and ran a wee bit faster!
I finished in about 28 minutes - not a great time, the girls took about 31 minutes so a lot slower than Kitty managed last year.
I got home and the Garmin uploaded all the data from the race. It is not pretty! It also confirmed something I slightly suspected last year and suspected again this year. I know how fast I can run 5k, and what the pace feels like over that distance. I know that I was running very slowly today, and that it is unlikely that I could have completed 5k in the time I was running. The GPS distance, which shows the extra switch backs I made to check on the girls (you get some funny looks running the wrong way in a race!) is 4.55k! I don't doubt my Garmin (or my gut instinct), the Garmin has been spot on for all the other known distances I have run - so I can't see it being wrong now!
I haven't told my daughter, her friend or my friend - whose first ever race this was. It would seem mean to take away their sense of accomplishment. This race was run across park land - it wouldn't have been hard to add in an extra 500m or so, and it should be fairly easy to measure the distance.
Ho hum! At least I didn't blub too much reading everyone's back signs about who they were running for this year! And we have raised a few pounds for a great charity. As I said earlier - I won't be doing it again, but it occurs to me that I would get a perverse sense of pleasure from entering as many as possible and auditing them for organisation and accuracy of course distance...
My hip held out quite well. I haven't been for a run since Wednesday (5.6 km, over hills, in 30 mins) when I wanted to make sure that I could run on my hip, as I had been 'resting' since last Friday. I went to the GreenDay concert at Wembley Stadium on Saturday night. Three hours of jumping up and down seems to have been very beneficial to my IT band. Just as well as I didn't get home until 2am! My hip is a little sore now - but nothing like as bad as it was this time last week. I am so pleased, as this week has been miserable without being able to run.
Posted by MrsBridgewater at 19:17