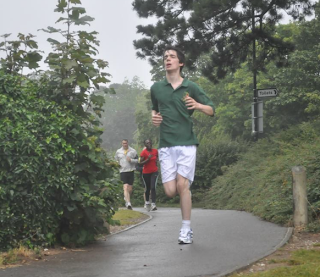 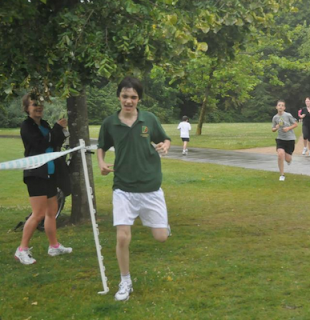 As I mentioned in yesterday's blog post, my oldest son recently announced his intention to do Basingstoke parkrun with me today. I asked him, last night, what time he would need waking up so that we could leave the house at 8.30am and was told to wake him at 7.30am. I did this and then went downstairs to make my breakfast, he wandered in to the kitchen and then vanished... back to bed! At 8am I went back upstairs and asked him if he was coming with me or not, he muttered under his breath, but got up and was ready to leave on time.
The weather was miserable! A typical British summer day! There was a constant drizzle interspersed with heavy showers and a bitingly cold wind. Waiting for the race to start was grim. I managed to persuade the boy to take off his track suit bottoms and sweat shirt and leave them in the car, and we headed off for the start.
He hasn't been running, or done any form of exercise really, for well over a year. This is not through choice, but due to a nasty bit of abdominal surgery that has left him in pain for a lot of the time. He is getting much better now - either that or we are getting the cocktail of painkillers right at last, and is wanting to do 'normal' things again now - and what could be more normal than wanting to get up early on a wet Saturday morning to go and run around a park with a load of strangers and your mum?
Thankfully Euan got us off and running fairly quickly. I messed up my Garmin again at the start, so set off while trying to work out what to do with wet fingers! The boy kept up with me for about the first 500m and then I lost him. The photos in this blog post have been grabbed from the parkrun site (thank you to whoever took them!) He looks just like his dad did in photos of him running at the same age! I remembered how much I hate running in glasses in the rain (and cursed the fact that I am running so low on contacts that I'm only wearing them for 'best'), I was fine on the straight bits in the open, but the curvy bits in the shade were a bit of a challenge. Still, I finished just 20 seconds slower than my PB.
My son finished less than 7 minutes later, in 30min 27sec - not bad at all for a first run after over a year of no exercise at all. I think I am going to have to watch out as he will be leaving me behind before too much longer! He has stated his intention to come again next week - hopefully we'll have some better weather by then!
Posted by MrsBridgewater at 18:59