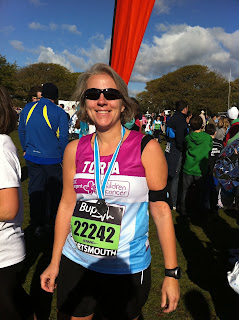 Set off bright and early, with my neighbours, for Portsmouth today. The weather was lovely, crisp, blue skies and very little wind, ideal running conditions. The atmosphere before the race was friendly which made the wait for the start a little easier to endure. The organisation was...odd! 23,500 people were taking part, and we were split into three waves, orange, white and green. Normally these waves are organised so that the fastest runners go first and the slower runners start later, and starting waves are often sub divided so that within the wave the same thing happens. This avoids having to constantly having to change direction to avoid the slower moving person in front while at the same time trying not to get in the way of the faster person who is trying to get past you. But this wasn't the case today. I am a faster runner than my friend, but she was in the first wave and I was in the last one, and the waves were not subdivided. Unlike a lot of other races the bunching and crowding did not ease up as the race progressed: I worked my way through most of the green wave starters by about mile 3, but then I caught up with the slower runners of the white wave - so I was constantly running around people and slowing down to avoid collisions. There was no way you could pick a pace and stick to it for more than a few meters at a time.

High points of the race include running through the Historic Dockyards (I've never been to Portsmouth before, other than a shopping trip to Gunwarfe Quay), overtaking Superman and the view over the sea front for the last mile and a half. Low points include being hit by a flying water bottle on the A2030! Apparently this had been an issue in previous years, local youths think it is amusing to throw half empty water bottles (just after the water stand) back into the crowds of runners. As they are on a bank at the side of the road they have a good position to aim from. It is not so amusing when the bottle hits the side of your head when you are least expecting it! Another low was having a coughing fit so severe that I had to stop, lean on the barrier and wait until I could breath again before continuing.

I am gutted with my time. My Garmin says I ran 10.08miles in 1h 29m 54s, and I was sure that I was well and truly across the finish line before I hit 'Stop.' I was somewhat disappointed with this time as I know I could have run faster, given a clear route through the race, but at least it was sub 1h 30m, so I was utterly despondent when I found out that my official time was 1h 30m 11s!

Ho hum, there is always next year, and who knows, I may even manage to do a race next year when I am healthy! That will make a difference I hope. And it was fun, really it was! I still had plenty of energy to up the pace for the last 200m as I threw myself across the finishing line.
Posted by MrsBridgewater at 16:45